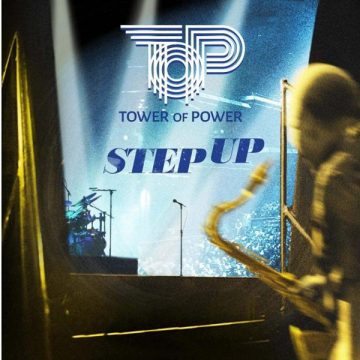 With over half a century of music under their belt, iconic Oakland funk band Tower Of Power are back with their 21st release. Step Up is a return to traditional form and sees the horn-driven soul ensemble soar through 14 tracks. Written over a six-year period and recorded during the same sessions as 2018’s Soul Side Of Town, Step Up feels fresh and invigorating in the musical climate of today.

Opening with the brief intro that is “East Bay! All The Way!”, Step Up makes you feel as if you caught the end of the song as you slid into your booth at a packed California jazz club in the ‘70s. It is transporting and atmospheric – you can smell the cigarettes and booze in the air – allowing for the listener to fully absorb the funk of the following number, “Step Up”. The title track is simply overflowing with groove and features a series of dynamic horn lines and rhythmic vocal melodies. Even in his 70s David Garibaldi is still the man! Furthermore, the organ solo and the jazzy guitar licks and vocal refrains as the song closes are all excellently delivered.

Tower Of Power, while primarily funk and soul-driven, has always straddled a number of styles within their songwriting and performance. A gospel flair can be heard in the heavy use of group backing vocals throughout the whole record, while “Who Would Have Thought” is a pop ballad that rests somewhere between Prince and The Rolling Stones. There are elements of jazz, classic R&B (“Sleeping With You Baby”, “Let’s Celebrate Our Love”), and the funk/jazz fusion that is common among such stage bands (“If It’s Tea Give Me Tea”, “If You Wanna Be A Winner”). As always, Tower Of Power is at its best when it digs deep into that big and raw funk vibe, as best heard on “Look In My Eyes” and “You Da One”.

Step Up, despite decades of shifts in the Tower Of Power lineup, has the makings of a classic record from the already incredibly-acclaimed soul group. There is no shortage of well-written songs, stylistic variety, and exceptional musicianship on Step Up and while it may feel like a throwback to a funkier time, Tower Of Power prove to be just as fresh as always on this absolute jam of a record.

A passion for music has always been a part of Gerrod’s life. As a young boy, he was raised on a steady diet of the music from The Chili Peppers, Aerosmith, The Stones, Prince, and others from his mum. Raised in the GTA, Gerrod continued to foster his love for music by attending a wide range of concerts and learning the drums. His unapologetic passion for music has no bounds and has spread to a wide variety of styles, whether it be the 90’s rock that sound tracked his teenage years, the jazz he studied in university, or his newfound love for hip-hop. He recently received his bachelors in music and education from York University and is passionate about writing and reviewing good (and less than good) music. Gerrod is also the drummer and songwriter for a Toronto based rock & roll band, One In The Chamber.
RELATED ARTICLES
album reviewalbum reviewsmack avenue records
7.0