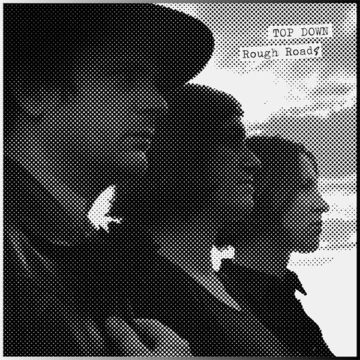 Rough Roads is the first full-length album by lo-fi rock trio Top Down. Although based in Portland, the band’s international members hail from the U.S., Germany, and New Zealand. Associated acts include Chain & The Gang, Dead Moon, and The Coolies.

Unfortunately for listeners, this album is nothing particularly special or innovative. The album suffers from somewhat unimaginative guitar riffs (“Silver Ashes”, “Blue Mountain Blues” “Rough Road”), though it does have some noteworthy guitar performances with songs like “She’s Gone” and the closing track “Steer Me”.

While Szim’s & Struggler’s vocals are technically adequate (in terms of both singing ability and recording quality), their performances are usually delivered without any identifiable passion. Lyrically, the album is fairly simplistic, and mostly addresses themes of romance and personal relationships.

Top Down is definitely a band with potential, but only if they decide to focus on writing quality songs rather than enough songs to fill an album. Tracks like “She’s Gone” and “Steer Me” are demonstrative of the trio’s ability to create music that can attract and sustain the interest of listeners, but a couple of enjoyable songs on an overall forgettable album leaves an impression of carelessness for craft. For now, Top Down is a band to keep an eye on, though Rough Roads is nothing particularly praiseworthy.eview

The Spill Magazine is a Toronto-based online publication dedicated to covering the independent music scene with a strong focus on our thriving hometown talent. Our writers bring you up-to-date news, in-depth features on musicians and reviews for the latest CD releases. We also travel to the front lines for all local festivals including Canadian Music Week and North by Northeast. Don’t forget to check out our Facebook and Twitter pages for all daily Spill updates.
RELATED ARTICLES
album reviewsshe's gone
8.0