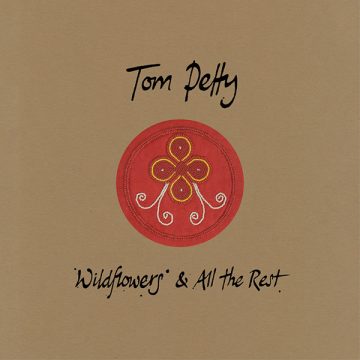 Three years ago, shortly before commencing his fortieth, and tragically his final tour, Tom Petty announced that his seminal 1994 album, Wildflowers, had an entire second half, written and recorded during the same sessions that he was hoping to release in the near future. The news came as a very welcomed surprise that the album was intended to be a double one. For many fans of his work, Wildflowers stands as a favourite throughout his iconic discography, and is among his most intimate and artistically driven works. Now, following a pair of greatest hits albums, the Petty estate has released Wildflowers & All The Rest, a collection consisting of the 2014 remastered Wildflowers, the fabled second half of the album, a series of demos, and live material from the era.

Needless to say, Wildflowers remains an essential classic, even 26 years later. From its massive hits “You Don’t Know How It Feels”, “Wildflowers“, “It’s Good To Be King”, and “You Wreck Me”, to the rocking riffs of “Honey Bee”, and finally the acoustic melancholic ballads “Only A Broken Heart”, and “Crawling Back To You”, the album has an incredible range of songwriting styles, performances, and emotions. Written and recorded during a period of isolation, heartbreak, addiction, and a drastically changing personal life, Wildflowers is a vulnerable album and perhaps the greatest example of Petty simply being Petty.

The second half of Wildflowers proves to be just as artistic and, simply put, magnificent as the original release. Largely comprised of acoustic tracks and somber, down-tempo tracks, one can understand why they’d be cut in order to deliver Wildflowers as a single album, rather than a double; however, it is clear that the inclusion of these additional 10 tracks makes Wildflowers an even more complete composition. Songs like “Confusion Wheel”, “Leave Virginia Alone”, and the previously released “Somewhere Under Heaven” add to Petty’s legacy of songwriting brilliance, while “Harry Green” and “California” speak to the special simplicity of his work. In short, the second half of Wildflowers is equally as essential as the original which, ultimately, makes one of Petty’s greatest albums even stronger.

Of the demos, or rather home recordings, as they’re titled, Petty continues to surprise with a series of 15 early recordings stripped down to the bare bone of songs that would eventually be released on Wildflowers in either 1994 or 2020. While the odd demo can prove interesting as it lifts the curtain to the workings of the wizard, very rarely does a collection of demos prove to be; after all, most would prefer to listen to the completed studio version. The home recordings of Wildflowers & All The Rest, on the other hand, prove to be almost as compelling as the completed material. While some demos are simply acoustic recordings of songs with Petty singing , as are “A Higher Place”, “You Don’t Know How It Feels”, and “To Find A Friend”, others prove to be far more special. Most notable is the even more haunting demo of “Don’t Fade On Me”, the completely different campfire swing of Crawling Back To You”, and “Wildflowers” which originally featured a bridge that shared the same melody and chord progression of “To Find A Friend” before the two were likely written to be separate songs. In many ways, the home recordings demonstrate Petty’s creative process, but also speak to the involvement of producer, Rick Rubin, and the members of The Heartbreakers, most notably guitarist Mike Campbell and pianist Benmont Tench, who appeared throughout the recording sessions.

Of the final quarter, the 14 live tracks recorded likely throughout Petty’s subsequent tour with The Heartbreakers in ‘94 and ‘95 are as exciting and lively as any of the other live collections Petty has released over the years. The selection is based largely around that of Wildflowers – performing 11of the original 15 tracks – but also includes “Walls”, “Drivin’ Down To Georgia”, and “Girl On LSD”. The material reinforces just what a tight unit The Heartbreakers were as they breathe a new sense of life into the music while Petty’s dry humour and earnest charm can be heard while introducing some songs. Standout performances include “Cabin Down Below”, “Wildflowers”, “House In The Woods”, “It’s Good To Be King”, and, of course, the hard-rocking “Honey Bee”.

While it is common for such expanded reissues to add an abundance of quantity without managing to improve the original album’s legacy, Wildflowers & All The Rest stands as a breathtaking exception as Petty’s family and bandmates dig deep to expand Wildflowers to reach a far greater potential than the original. Truly, this collection paints a picture of Petty’s creative state, prior to, during, and following the sessions for Wildflowers. Refusing to fall short of essential, Wildflowers & All The Rest is truly an incredibly beautiful collection that speaks boundless volumes to the artistry of Tom Petty.

A passion for music has always been a part of Gerrod’s life. As a young boy, he was raised on a steady diet of the music from The Chili Peppers, Aerosmith, The Stones, Prince, and others from his mum. Raised in the GTA, Gerrod continued to foster his love for music by attending a wide range of concerts and learning the drums. His unapologetic passion for music has no bounds and has spread to a wide variety of styles, whether it be the 90’s rock that sound tracked his teenage years, the jazz he studied in university, or his newfound love for hip-hop. He recently received his bachelors in music and education from York University and is passionate about writing and reviewing good (and less than good) music. Gerrod is also the drummer and songwriter for a Toronto based rock & roll band, One In The Chamber.
RELATED ARTICLES
album reviewalbum reviewstom petty
10