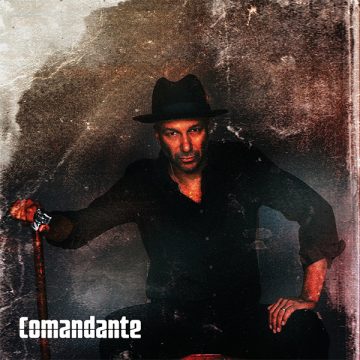 With only a few days’ notice, Tom Morello’s latest surprise EP, Comandante, has arrived. It is his first true follow-up to 2018’s The Atlas Underground – save a string of singles and an instrumental version of said record. The five-track EP delivers five tracks in which Morello jams with Slash, pays homage to Eddie Van Halen, and covers Jimi Hendrix.

Treading where few, if any, would attempt to go, Morello boldly opens his latest EP with an instrumental cover of the Hendrix classic, “Voodoo Child”. With a rendition that is both traditional and modern, Morello soars through the track with reckless abandon and a bombastic nature. Intertwining licks from the original 1968 recording with his distinctive style, while also referencing Hendrix’s vocal melody on the guitar, “Voodoo Child” is covered in a manner like you’ve never heard before, and is brimming with dynamics that make the track sound absolutely massive. Furthermore, Morello’s guitar tones are phenomenal and remain some of the best around. His tasteful instrumental arrangement of the classic is simply brilliant and a must-hear alone.

Beyond a truly incredible opener, Comandante continues to excel with “Interstate 80”, a hard rock track that bridges Rage Against The Machine riffs with Nightwatchman-style vocals and lyrical narrative. Most excitedly, however, it sees Morello duel on guitars with none other than Slash–not once, but twice–for a show-stopping rock banger. This is then followed by a live cut of “Secretariat”, a guitar-tapping melody performed between songs with Prophets Of Rage and very much inspired by Eddie Van Halen, making for an exciting tribute to the late legend. Comandante comes to a close with two more instrumental tracks. The first, “Suburban Guerilla” sees Morello build fiery riffs only for him to impressively solo over while “Cato Stedman & Neptune Frost” is a slow and incredibly emotive blues ballad that sets a sense of raw darkness for Morello’s tasteful classic yet modern soloing to shine through beautifully. Despite a lack of lyrics or vocals, there is an unmistakeable feeling of reflection, anger, and peace on “Cato Stedan & Neptune Frost” and it is beyond refreshing to hear Morello dive into the blues like this.

Where The Atlas Underground saw Morello attempt to fit his guitar into an electronic setting full of club beats, pop vocals, and rappers, Comandante is a true guitar record. Covering Hendrix alone in this manner is enough to reaffirm Morello’s guitar hero status; however, he digs deep with his tribute to EVH and his extended jams with Slash. Doubling down even further with his soloing and blues influence, Morello denotes a level of taste and refrains at moments, only to indulge greatly at others. Comandante is a fantastic display of performance and stands as a highlight of Morello’s iconic career, and ultimately makes a very strong case for being among the strongest rock record of the year.

A passion for music has always been a part of Gerrod’s life. As a young boy, he was raised on a steady diet of the music from The Chili Peppers, Aerosmith, The Stones, Prince, and others from his mum. Raised in the GTA, Gerrod continued to foster his love for music by attending a wide range of concerts and learning the drums. His unapologetic passion for music has no bounds and has spread to a wide variety of styles, whether it be the 90’s rock that sound tracked his teenage years, the jazz he studied in university, or his newfound love for hip-hop. He recently received his bachelors in music and education from York University and is passionate about writing and reviewing good (and less than good) music. Gerrod is also the drummer and songwriter for a Toronto based rock & roll band, One In The Chamber.
RELATED ARTICLES
album reviewalbum reviewsrage against the machine
7.0