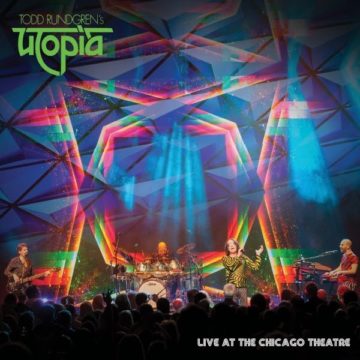 In 2018, Todd Rundgren reunited with former members of Utopia and began a tour that took him and his band on the road for an extensive tour. The tour was a success, both commercially and critically.  Live At The Chicago Theatre documents the reunion and one show midway through the tour. As fans of the band know, Utopia had many member changes from their formation in 1973. For this tour, Rundgren was joined by  Kasim Sulton (bass, lead vocals since 1976), Willie Wilcox (drums, lead vocals from 1975 to 1986) and Gil Assayas (keyboards, since 2011). Todd Rundgren continues to tour on his own (hitting Toronto at the end of April) and this tour has also been a very big success.

Live At The Chicago Theatre is not the first live album from Utopia, but what makes this album so appealing is that Rundgren and crew do a deep dive into the catalogue. This is not a greatest hits live collection. Fans will appreciate some of the more obscure songs, such as “The Wheel” (from Another Live, 1975), or “Hammer In My Heart” (from Utopia, 1982) or “Play This Game” (from POV, 1985). It is great to hear some of these songs, dusted off and played live. This album is for dedicated fans, as well as a chance for new fans to discover Utopia. Sure, some of the well-known songs are here, but it is the album tracks that make this live set so appealing.

Live recordings are tricky and producing a live album is not easy. Often there is little use in them, but Live At The Chicago Theatre is different. Here is a band that has not played together for many years and some songs that they have not performed live for a long time, if at all. Because Rundgren is involved, the album mix is perfect and sounds fantastic. Rundgren’s voice is strong and he sounds like he is having the time of his life playing with this band and performing these songs. Utopia sound great. The musicianship is absolutely spot on and the band performs the songs perfectly with enough differences from the studio versions to keep your interest.

The CDs come packaged with a DVD set, and it is always great to have the visuals along with the music. Rundgren is always a pleasure to watch, and in this case it is well filmed, and again it shows a talented band in top form. It is a nice addition to the set, and adds to the value of the album.

Several bands regroup from time to time, end up on tour, and sound almost like a karaoke version of themselves. This is not the case with Todd Rundgren’s Utopia. This is a band who is creating and evolving their music. Rundgren and Utopia always walked the tightrope between prog rock and pop, and on this double live album, both are addressed beautifully. Rundgren would be wise to get this band into a studio and record some new songs–I think it is time for new Utopia.