SPILL ALBUM REVIEW: TOBIN SPROUT – THE UNIVERSE AND ME 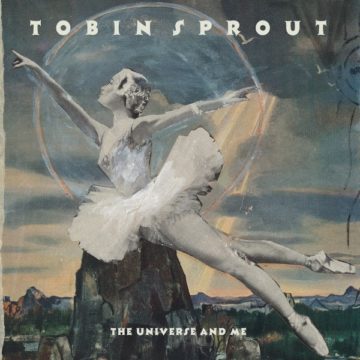 Tobin Sprout
The Universe And Me
Burger Records

This is Tobin Sprout’s sixth solo album and first album in seven years. The Guided By Voices guitarist found his voice by going solo. Although he does reunite with GBV periodically, he seems to be focusing on his solo career at the moment. While the guitar work is admirable throughout, especially the opening track (“Future Boy Today/Man of Tomorrow”), it is his stunning, gentle, and hurting voice that is a highlight.

Here we have a 61-year-old man using music, lyrics, poetry, and soundscapes to figure out his place in the grand scheme of things, while reminiscing and visiting his youth. Throughout this exploration he meets ghosts of himself. The music is primitive and borrows heavily from The Beatles (listen to the beginning of “When I Was A Boy”, and tell me that does not sound like “A Day In The Life”), and the alternative rock world in which he was immersed. It is the piano driven, Beatlesque melodies that take hold and will not let go. The album is sad and celebratory at the same time, kind of like life, but Sprout goes one step further. He uses his influences to illustrate the emotions and thoughts he is trying to get across (“To Wake Up June” is but one example). The lengths of the songs are perfect, not too long, and always leaving one wanting more, like the great pop songs of our time.

This is, for my money, the best album he has ever recorded, and I am not ashamed to say that I was moved to tears during several songs. This album is pure, and I cannot wait to see him live in 2017. I know it’s early, but this will be the album for 2017 that all others will be judged against.

SPILL ALBUM REVIEW: TOBIN SPROUT – THE UNIVERSE AND ME

Here's what we think...
Spill Rating
Fan Rating
Rate Here
New Criteria
10
9.3
9.0
Total Spill Rating
9.3
Total Fan Rating
You have rated this
Album Reviews
album reviewsburger recordscowboy curtainsthe universe and meto wake up junetobin sproutwhen i was a boy
album reviews, burger records, cowboy curtains, the universe and me, to wake up june, tobin sprout, when i was a boy
About the Author
Aaron Badgley

Born and raised in Whitby, Aaron discovered music through his love of The Beatles. This led to a career in radio, writing for various publications, and ultimately a radio show about The Beatles (Beatles Universe), which ran for over four years. When not immersed in music, Aaron enjoys spending time with the loves of his life -- his wife Andrea, and daughters Emily and Linda (all of whom have an intense love of music too).
RELATED ARTICLES
album reviewsburger recordsthe universe and me
10