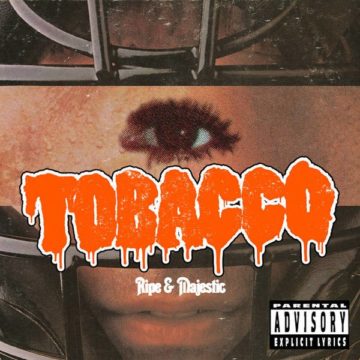 To narrow down exactly what Tobacco’s latest record, Ripe & Majestic, sounds like would be to say it’s a good combination of merging the old and the new. What I mean by that is in his songs there are even amounts of organic instrumentation like bass and drums but equalized by loud and harsh electronics.

As an example the song “Feels Like Nothing” introduces us to a guitar riff that sounds like it comes from a 70’s road trip film, accompanied by a foot-tapping beat. This guitar passes itself over to an electronic climax in the middle of the song and wraps up the way it started.

However, it’s not to say it’s all evenly distributed through the album as electro-rock. There are songs like “Slaughtered by the Amway Guy” that is mostly electronic except for the garage rock echo of the drums. That single I feel is a great introduction to what Tobacco is about. A stand out track is “Washed”. It’s a unique track that separates itself from the others as an outro track. It begins with a simple guitar plucking on what sounds like it’s recorded on a crackly record but then merges into synth-strings and catchy synth melody which builds up to the end of the track. This record isn’t for everyone as there’s nothing to sing to (unless you count Beck’s guest appearance on the track “Grape Aerosmith” as he squeezes his voice here are there) and it’s harsh on the ears if listened to loudly, but it’s a groovy listening experience where alternative and hip-hop meets.

Vicki Mahony is taking her hobbies of concerts, photography, and ranting and putting them to good use! She is a live-music photographer and reviewer.
RELATED ARTICLES
album reviewsrad culttobacco
8.0