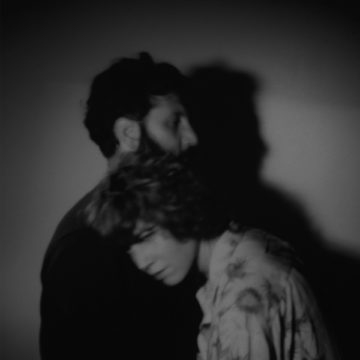 Swedish-Canadian duo Erika and Simon Angell have been steadily traveling into the depths of sound possibilities for nearly a decade, reaching out to incorporate unconventional melodies or structures into their music. On their latest release The Mountain That We Live Upon, they collaborated with a group of seven musicians to layer additional guitars, saxophone, trumpet, and percussion, and recording the sessions live which translates the raw vigor that courses through every note. The result is an impressive success of ingenuity, with many moments being able to display a cohesion that plays like perfect captures of the type of improvisation you can only get once.

The majority of the tones on this album maintain a fairly bleak quality to them, done in part to Erika’s mournful singing that can turn you into clay for the band to mold. “Ashore” is a fantastic example of this and also works to showcase the multiple lenses they cast over the songs, ranging from noise, pop, ambient, jazz, and free form styles. A lot of the base melodies from Simon’s guitar playing come in the form of slowcore-influenced leads that, with the inclusion of three other guitarists, can erupt into a wavering wall of sound such as what is found in “Solar Eclipse” and “Future/Past.”

There is something new to be found through each repeated listen of this album, from having it accompany your daily routines to immersing yourself in a single introspective sitting. Whether it is looking into what Erika’s lyrics or vocal rhythms light inside you, or peeling away the layers of the explosive saxophone-fueled closing to the track “Devils in the Dark,” this is one that is well worth the time just to follow them down paths you didn’t know could be explored.

The Spill Magazine is a Toronto-based online publication dedicated to covering the independent music scene with a strong focus on our thriving hometown talent. Our writers bring you up-to-date news, in-depth features on musicians and reviews for the latest CD releases. We also travel to the front lines for all local festivals including Canadian Music Week and North by Northeast. Don’t forget to check out our Facebook and Twitter pages for all daily Spill updates.
RELATED ARTICLES
album reviewalbum reviewsthus owls
7.0