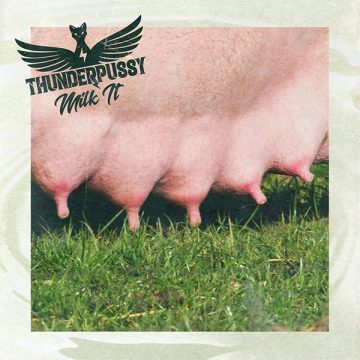 Following the incredible success of 2018’s self-titled, full length album, Seattle’s – and Mike McCready’s – favourite new band, Thunderpussy, are back at it again with Milk It. The four track EP, produced my McCready, is, simply put, a must hear release from one of America’s most promising up and coming bands.

Opening with the dark and mysterious vibes of “Powerhouse”, Milk It kicks off on a grand note with a song that only builds in energy, performance, and sheer power from an echoing vocal refrain and hand claps to an all-out rock and roll banger. While the band as a whole are performing a step above where they left off on Thunderpussy, it is especially worth noting that lead vocalist Molly Sides is absolutely killing it, delivering vocals that are equally soulful as they are hard hitting. The track is further driven by a Bonham-esque groove, performed by none other than The Red Hot Chili Peppers’ Chad Smith, who is featured on the opening song. Milk It continues with “Never Know”, a slightly funky rocker demonstrating widely contrasting dynamics between the verses and chorus.

The latter half of Milking It proves to be just as exciting as the first and includes the acoustic ballad, “On The Line”. The song opens with a soft, reminiscent of Neil Young as the song grows with the addition of lush backing vocals, strings, and a rhythmic shift in style of the epic ballads from Led Zeppelin. Concluding the album is “Trust A Man”, yet another larger than life composition that fuses acoustic and electric guitars from Whitney Petty in a fashion somewhere between Heart and Bowie’s glam era. The track not only brings Milk It to a climatic and strong close – one that, once again, pushes the performance and songwriting capabilities of the band further than before – but it will leave the listener needing far more.

Just like that, four songs have gone by and Milk It begins to repeat. For those who have yet to hear of Thunderpussy, think of if rather than breaking up, The Runaways released a fifth album, one which channelled the punk energy and funnelled it into the classic rock style which they had opposed on their early work. Milk It is just that; a hard hitting, fast paced, and energetic EP that indulges in vintage tones, carefully crafted instrumental interludes,  and a classic vibe through four tracks which feel fresh, thrilling, and distinctively that of Thunderpussy. What is perhaps most commendable is their ability to capture the raw energy of their live show in the studio on a record that feels suspenseful and dangerous in its writing and performance. Considering my only fault with Milk It is that I need more of it, Thunderpussy has once again delivered an EP that, without a doubt, is a must hear record and among my favourites released this year.

A passion for music has always been a part of Gerrod’s life. As a young boy, he was raised on a steady diet of the music from The Chili Peppers, Aerosmith, The Stones, Prince, and others from his mum. Raised in the GTA, Gerrod continued to foster his love for music by attending a wide range of concerts and learning the drums. His unapologetic passion for music has no bounds and has spread to a wide variety of styles, whether it be the 90’s rock that sound tracked his teenage years, the jazz he studied in university, or his newfound love for hip-hop. He recently received his bachelors in music and education from York University and is passionate about writing and reviewing good (and less than good) music. Gerrod is also the drummer and songwriter for a Toronto based rock & roll band, One In The Chamber.
RELATED ARTICLES
album reviewalbum reviewsmilk it
7.0