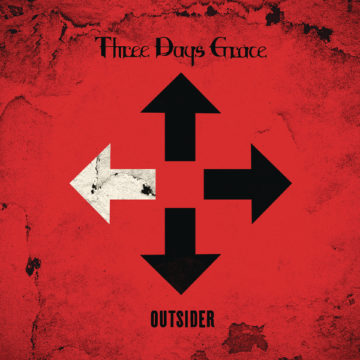 Everyone has times in their life where they just want to escape from everything. Now there is an album for you to help with those times of feeling stuck and annoyed with life. Three Days Grace has released their newest album Outsider with that exact message in mind.

Three years have passed since the release of their last album, Human. That means Three Days Grace has had a little time to settle in with their newest lead singer, Matt Walst, who replaced Adam Gontier in 2013. The band’s lineup now consists of the aforementioned Matt Walst (lead vocals, rhythm guitar), his brother Brad Walts (bass guitar), Neil Sanderson (drums, backing vocals), and Barry Stock (lead guitar). After having toured and recorded one album with the new lead singer, the group has tightened the screws and come together in a little more cohesive of a group. They have collectively decided that it is okay to want to distance one’s self from the crowd. The whole album discusses this.

The opening track “Right Left Wrong” seems to be a clever way of saying that sometimes you just have to march away, one step at a time. It can also be read as a disgust at the current political climate. Since America has seen some serious crap from both sides, the song is just saying how neither side is doing the right thing. The second song is the album’s first single, “The Mountain.” This song is a great way of encouraging people to keep pushing through because the human spirit can conquer anything. “The New Real” shows what has become of society now. It really calls out all the nonsense of the world. The song is full of disappointment in what the world has become with the rise of social media and the implications that come with it.

Though this is a style of music not known for being the most lyrically powerful, Three Days Grace has challenged that notion with Outsider. They bring the usual powerful guitar, strong rhythm of drums, and driving force of the bass. This time they also bring their new singer’s grungy voice coupled with strong, meaningful lyrics to push the group to new heights. The mix the producers brought adds a little electronic backing to give the little extra boost needed to make the music a little more individual, which fits the theme of being an outsider so much more. Ultimately, Three Days Grace has shown that even with a lineup change, they can polish the sound and come back a little stronger than before.

The Spill Magazine is a Toronto-based online publication dedicated to covering the independent music scene with a strong focus on our thriving hometown talent. Our writers bring you up-to-date news, in-depth features on musicians and reviews for the latest CD releases. We also travel to the front lines for all local festivals including Canadian Music Week and North by Northeast. Don’t forget to check out our Facebook and Twitter pages for all daily Spill updates.
RELATED ARTICLES
album reviewsoutsiderrca records
8.0