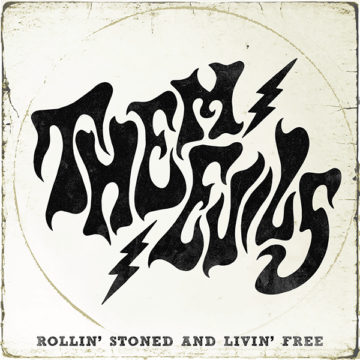 While North America seems to be in the midst of a rock & roll revival, Southern California based power trio Them Evils has risen in popularity rapidly since touring with the likes of Alter Bridge, The Pretty Reckless, and most recently, Zakk Wylde’s Black Sabbath cover band, Zakk Sabbath. Having performed for audiences internationally, Them Evils have proven time and time again that they are a band to watch out for since the release of their debut self-titled EP in 2016; however, having made such great progress in such a short time, the band has released Rollin’ Stoned And Livin’ Free. The six track album acts as the follow up to their debut. It features three new tracks, but also features a few previously released tracks, remixed and with alternate arrangements, making Rollin’ Stoned And Livin’ Free the band’s second debut record that seamlessly introduces their best material to their new audience.

Rollin’ Stoned And Livin’ Free opens with one of its strongest songs, “Got Me Rockin’”.  The track opens with a rhythmic blues based riff and a driving verse before exploding wide open with a larger than life chorus. Aside from a series of impressive lead guitar lines, the song also features a fiery guitar solo and a number of catchy vocal and instrumental hooks. The album goes on to include the fast jive talking of “She Got Nothin’” that is propelled by an offbeat blues verse that feels like a backwards step forwards, and then two crunching rockers, “Gets Me High” and “Have One On Me”. The record comes to a dramatic close with the final two tracks, a one-two punch knockout with a re-recorded version of “Untold” – an incredible track with some of the nicest tones I’ve heard in quite some time – and the heaviest track on the album, “Practice What You Preach”. Throughout six tracks, Rollin’ Stoned And Livin’ Free will leave listeners beyond thrilled and longing for more.

While it is easy to connect Them Evils as a modern extension to the blues hard rock pioneered by legends of the likes of Led Zeppelin, Black Sabbath, and AC/DC, their sound is far richer than most rock revivalists. The band is evidently very inspired by some of classic rock’s greatest icons, but there are also elements of other eras separate from blues driven rock, including a slightly grungy inspired vibe that likens the band to Soundgarden. It is also worth noting that vocalist and guitarist Jordan Griffin’s vocals add a raspy funkiness reminiscent of Chris Robinson from The Black Crowes. Such a blend gives Them Evils a highly unique sound that is both distinctive and incredibly exciting.

Rollin’ Stoned And Livin’ Free is a flawless and jaw dropping album that puts Them Evils in a position worthy of being among rock’s top up and coming bands. This is a phenomenal record from a band I cannot praise enough, that given enough momentum, could very well shape the future of rock ‘n’ roll.

A passion for music has always been a part of Gerrod’s life. As a young boy, he was raised on a steady diet of the music from The Chili Peppers, Aerosmith, The Stones, Prince, and others from his mum. Raised in the GTA, Gerrod continued to foster his love for music by attending a wide range of concerts and learning the drums. His unapologetic passion for music has no bounds and has spread to a wide variety of styles, whether it be the 90’s rock that sound tracked his teenage years, the jazz he studied in university, or his newfound love for hip-hop. He recently received his bachelors in music and education from York University and is passionate about writing and reviewing good (and less than good) music. Gerrod is also the drummer and songwriter for a Toronto based rock & roll band, One In The Chamber.
RELATED ARTICLES
album reviewsjordan griffinred sun rising
10