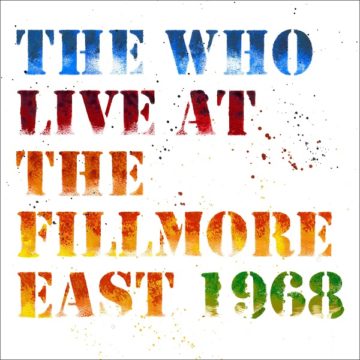 The Who
Live At The Fillmore East 1968
Geffen/Universal Music

It seems an odd task, writing a review for a recording which has existed (as a bootleg) for almost fifty years. But when you’ve been rocking it out for as long as The Who have, the release of The Who Live At The Fillmore East 1968 is a noteworthy event. Originally intended as a stopgap between The Who Sell Out and Tommy, this album was restored by longtime band sound engineer, Bob Pridden, who painstakingly remastered the tracks from the original four-track tapes. Right off the top, the listener is assailed by the ferocity of the performances: high decibel power, from the earliest employers of the Marshall stack. Straight-on rock ’n’ roll covers – “Summertime Blues” and the previously unreleased “C’mon Everybody” – practically jump out of the speakers. Reflecting the 1960s as an era of change, this album marks the beginning of a stylistic watershed for The Who. Early hits such as “I Can’t Explain” and “Happy Jack” are present, but with renewed power and intensity. Pop songs morph into extended blues/rock jams. An 11-minute suite contains six musical movements(!), hinting at the incubation of brilliant works to come, in the form of rock operas Tommy and Quadrophenia. The music of The Who has become so ubiquitous, it’s hard to imagine a time when it was not in the mainstream of pop culture. On this album we hear a young, loud, talented, and extremely tight band. Although they had yet to break in America in a big way, that was all about to change.

Bryan Williston has been involved in music since he was a young child. A veteran singer, songwriter, and music educator, Bryan has enjoyed playing a multitude of musical genres in a variety of outfits, over the years. Bryan lives in Whitby, Ontario.
RELATED ARTICLES
album reviewsgeffenthe who
7.0