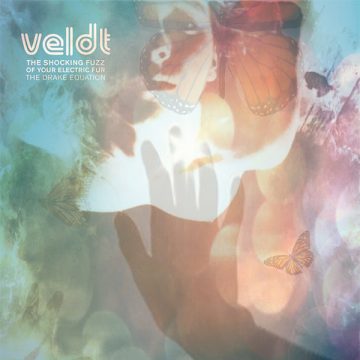 The Veldt
The Shocking Fuzz of Your Electric Fur: The Drake Equation
Leonard Skully Records

Besides producing wonderful college basketball, Raleigh, North Carolina has given us Daniel and Danny Chavis, otherwise known as The Veldt, a name taken from a Ray Bradbury science fiction story. Alongside bassist/programmer Hayato Nakao, the latest work of The Veldt features five dreamy electronica pieces. The Shocking Fuzz of Your Electric Fur: The Drake Equation is titled from an E. E. Cummings poem, “I like my body when it is with your body…”. You can probably guess what’s on the boys’ minds…..

The album opens with “Sanctified,” which was declared as the EP’s single. Soulful and full of guitar distortion, one can detect the influence of gospel, Motown and Pink Floyd that the Chavis brothers had been exposed to while growing up.

The Veldt provides an eclectic mixture of Hip-Hop, swirly, floating sounds that will take a number of listens to gain hold of the complex nature of the music. It is certainly not like the approachable dance piece, “The Veldt,” that Deadmau5 produced.

Soon after being signed to Capitol Records in 1989, The Veldt met with Dream-Gaze guru Robin Guthrie who worked on their initial recordings and then proceeded to play a number of concerts with the Cocteau Twins and The Jesus and Mary Chain; certainly not a typical music journey for American black artists. The Shocking Fuzz is meant to re-establish The Veldt, as a full album Resurrection Hymns is slated to be released in 2016.

An educator who also tries to introduce others to great music. It's a never ending job.
RELATED ARTICLES
album reviewsleonard skully recordsthe veldt
9.0