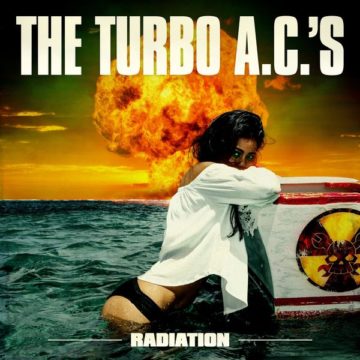 The Turbo A.C.’s kicked off the July 22 release of their newest album Radiation with a proclamation that “radiation will sweep the land, the kids will be infected” – and honestly, the kids don’t stand a chance. To say this album is infectious is an understatement – its undercurrent of angry energy fuses with the euphoria of a punk rebellion against anything and everything to create something downright electric. Radiation is a blitzkrieg of heavy riffs, choked out vocals, and crashing drums – with short, catchy songs, compelling (albeit repetitive) lyrics, and a sexily dystopic album cover, it has all the elements of a revolution-sparking punk album. The Turbo A.C.s’ style is quintessential ‘90s punk rock, and throughout their 23 years the band’s musicality has remained fairly consistent – why mess with a good thing? Radiation was conceived in the wake of massive upheaval, with lead singer Kevin Cole displaced from his New York City home, only to have his exodus followed by Hurricane Maria – perfect creative conditions for a high-octane surf-punk record. Its high production value doesn’t undermine the album’s raw grittiness, and the songs are both electrifying and honest: “there’s something wrong with everything I see/but baby, there’s nothing wrong with me”, Cole shouts.

“Nothing Wrong with Me” is certainly one of the album’s standouts, but Radiation is full of gems to rock out to. The cover of Lana Del Rey’s “High by the Beach” is particularly memorable, with a kickass melody and scratchy, spat-out vocals. With bitter, mocking lyrics – “you could be a bad motherfucker but that don’t make you a man” – put to The Turbo A.C.s’ frenzied style, this song was made both for venting rage and escaping it. “Go Ahead” is a buzzing riot song, the predictable-yet-pleasant chord progressions conjuring a The Ramones-meets-The Kinks style. “Can’t Get There from Here” waxes romantic on lack of motivation, lyrics such as “I was looking out the window for a job/but nobody gave me a call” reminiscent of Green Day’s “Longview”. “You Will Lose” is an ode to wildness and hedonism; sexy yet still fringed with a pervasive punk hostility, it demands the listener to “lose your mind and leave it all behind”. “Get Up” is a battle cry of a song, vibrating with ecstatic angry energy that makes it perfect for moshing. The album ends perfectly with a punk rock ballad of apathy: “looks like I wasted all my time/no gas in my tank/I got a million good times in the bank/so glad I wasted all my time”. Piano trills trickle through the strumming, tranquil tune, creating a celebration of laziness evocative of The Offspring’s “Let’s Hear it for Rock Bottom” or NOFX’s “The Agony of Victory”. Overall, Radiation is steeped deeply in classic punk culture, and is definitely worth a listen – or ten – for anyone nostalgic for the ‘90s punk scene.

Isabel is an English major at the University of Toronto, and spends most of her time reading books, listening to punk rock music, and writing for anyone and everyone willing to read it. Raised in Toronto, her somewhat eclectic music taste has been shaped by a healthy mixture of mosh pits and Mirvish musicals. She thinks live music is the highest form of entertainment.
RELATED ARTICLES
album reviewalbum reviewsradiation
9.0