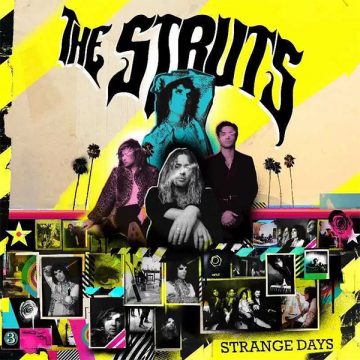 Critically acclaimed and fan favourites The Struts have returned with their latest album. Written and recorded with the band couch crashing at producer Jon Levine’s home studio during the pandemic, the appropriately-titled Strange Days follows their strong 2018 sophomore album, Young & Dangerous, and features a range of guest appearances from the likes of Albert Hammond Jr. (The Strokes), Joe Elliot and Phil Collen (Def Leppard), and, most excitedly, Tom Morello (Rage Against The Machine, Audioslave).

The album opens with the title track, the acoustically-driven soft rock ballad featuring Robbie Williams, which seems to fall flat at both setting the tone and kicking off the album. Beyond the relevance of the song, there really isn’t that much to the single. Even with the following pair of Rolling Stones-inspired rockers “All Dressed Up (With Nowhere To Go)” and “Do You Love Me”, the album failed to spark a grand sense of untamed excitement often associated with the glamorous image of The Struts. There’s nothing wrong with these three songs – the guitars crunch rhythmically like Keith Richards in ‘71 and the vocals are reminiscent of Freddie Mercury – but it feels compressed and polished, even more so than most modern rock records.

It does get better, however. “I Hate How Much I Want You”, featuring “King Of The Leppards” Joe Elliot and Phil Collen, is an absolute mammoth of an ‘80s rock banger that simply kicks ass. The same can also be said for “Wild Child” which features Morello on a moody, gritty, atmospheric, and modern track driven by a fat riff and slick lead lines. Throughout the 10 tracks, “Burn It Down” and “Can’t Sleep” bring back a larger than life classic rock vibe, while the album closer, “Am I Talking To The Champagne (Or Talking To You)” delivers late ‘70s club tone nostalgic for The Stones.

Despite being signed to a major label, The Struts still have a vibe about them; they’re kings of the underground wave of rock ‘n’ roll. Strange Days, however, feels like they’re trying just a touch too hard to break into the mainstream. As a result, what was once known as a dangerous band has had many of their rough edges polished and smoothed out in a quest for hit singles on the radio, in place of looking to continue making killer hard rock music nostalgic for some of the greatest bands from the ‘70s and ‘80s. That said there is still plenty of strong material on Strange Days; had this been an EP rather than an album, it even could have even been incredible. The Struts are a great band, however Strange Days feels like a departure from their fans expectations in effort to win the validation of a different audience. Hopefully, next time will see a return to their unique blend of massive, gritty, and glamorous rock ‘n’ roll.

A passion for music has always been a part of Gerrod’s life. As a young boy, he was raised on a steady diet of the music from The Chili Peppers, Aerosmith, The Stones, Prince, and others from his mum. Raised in the GTA, Gerrod continued to foster his love for music by attending a wide range of concerts and learning the drums. His unapologetic passion for music has no bounds and has spread to a wide variety of styles, whether it be the 90’s rock that sound tracked his teenage years, the jazz he studied in university, or his newfound love for hip-hop. He recently received his bachelors in music and education from York University and is passionate about writing and reviewing good (and less than good) music. Gerrod is also the drummer and songwriter for a Toronto based rock & roll band, One In The Chamber.
RELATED ARTICLES
album reviewalbum reviewsstrange days
7.0