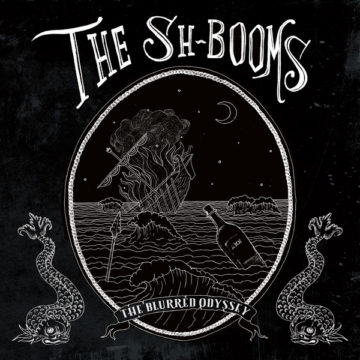 The Sh-Booms’ new full-length, The Blurred Odyssey, will move you… in every sense of the word.

With its live-off-the-floor feel, it’s almost as if the band recorded in a garage… in which is usually parked a weathered ‘60s Cadillac. Soulful vibes meet grungy punk, to create a hybrid sound that channels visions of whiskey and sweet sweat.

The album’s instrumental opener, “Amidst Chaos,” is an energizing yet sultry promise of things to come. The nine tracks that follow do not disappoint.

Stand-out tracks include the melancholy ballad “Audible.” While this track is nearly six minutes in length, it showcases the band’s versatility by slowing the beat, quieting the horns, and smoothing the guitar texture.

The album picks way up in “King & Queen,” where the vibe is of surf, punk, and almost psychobilly with the back-and-forth vocals between Radney and Ruiz.

The Sh-Booms have fashioned a style that would be at home in both a classy club or a dingy punk bar. The Blurred Odyssey is a musical journey – one that tells the tale of a band that has found its way to a powerful and original sound.