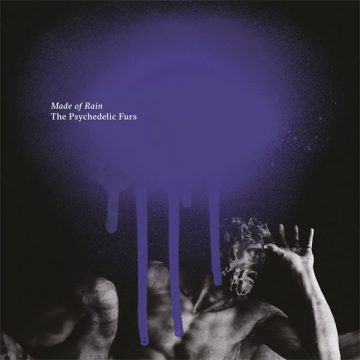 The Psychedelic Furs
Made Of Rain
Cooking Vinyl

It’s been 29 years since the last Psychedelic Furs album, 1991’s World Outside, but between 1980 and 1991, the band released a total of seven albums that featured such well-known radio songs as “Pretty In Pink,” and “Love My Way.” But behind those glossy and memorable hits, there stood a brilliant songwriter and lead vocalist named Richard Butler.

Butler has been one of the most watchable frontmen in the game, including during his time reuniting and touring with the band after 2000, but the new album, Made Of Rain, highlights his unique vocal style, his excellent songwriting skills, and his keen ear for melody.

The album opens with the explosive “The Boy Who Invented Rock And Roll”, and Butler’s familiar growling vocal is immediately recognizable, despite the band’s long recording hiatus. The moody “You’ll Be Mine” is reminiscent of John Cale and The Velvet Underground, “Wrong Train” highlights, once again, Butler’s considerable writing and vocal chops. The ballad “This’ll Never Be”, featuring a melancholic sax solo, is a reflective lament expressed in Butler’s vocals, about time not well spent.

Made Of Rain is chock full of musical surprises, and that’s especially true of the song “Ash Wednesday,” one of the highlights of the album, where Butler’s lyrics and vocals once again steal the show. The first single, “Don’t Believe”, is a recognizable Psychedelic Furs track, and was probably chosen for that reason, but the album is so much more than that.  “Come All Ye Faithful”, “Tiny Hands”, “No One”, and “Hide The Medicine”, showcase the band that features Butler’s brother Tim on bass, Mars Williams on sax, Rich Good on guitar, Paul Garisto on drums, and Amanda Kramer on keyboards.

Make no mistake, the real credit has to go to Richard Butler, whose vocal and lyrical performance seems to bring each of the songs together. In one of the final and best cuts on the album, “Turn Your Back On Me”, Butler demonstrates that he and The Psychedelic Furs haven’t lost any of their bite during their long and self-imposed recording exile, and perhaps with Made of Rain, they quite possibly have reached new heights.

Gerry Young is President of Current Records and Management, and author of the 2011 biography Pop Goes The Weasel: Rock And Roll Off The Record, available at Indigo/Chapters, Barnes & Noble, and Amazon.com. He has recorded and managed Juno Award winning bands Martha And The Muffins and The Parachute Club among others.
RELATED ARTICLES
album reviewalbum reviewscooking vinyl
9.0