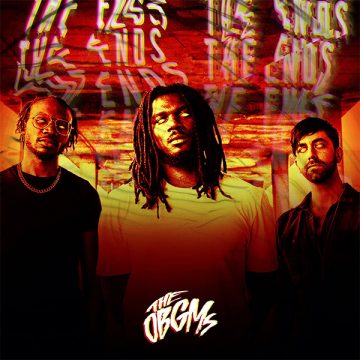 Following a series of singles released throughout this year, Toronto-based alternative punk band The OBGMs have returned with their latest album, The Ends. The 10-track record, clocking in at just over 23 minutes, hits like a sledge hammer to the side of the head, making up for its short run time with a raw and volatile energy unlike anything else this city has seen in years.

Kicking off with the explosive single, “Outsah”, The OBGMs almost immediately set themselves apart from nearly all their contemporaries. No one in Toronto and no punk bands around the world are making music like this. After only a minute and 52 seconds, The OBGMs have declared a sound that is unique to them, one that runs deep throughout The Ends and, ultimately makes for a stellar record.

The sheer ferocity of “Outsah” is matched by the reckless abandon of “Cash” and the relentlessness of “Triggered”. There are hints of The Stooges and Bad Brains on songs like “Fight Song” and “Not Again”, alongside a vocal style–with its often fast pace and highly rhythmic nature–that falls between throat-wrenching punk screams and rapping (best heard on “Karen O’s” and “WTFRU”), while songs like “All My Friends” and “To Death” bring a grungy post-rock and indie melodicism to the record. Wherever you pin The OBGMs on the musical spectrum, they’re bound to push the stylistic boundaries into yet another unique direction. This is a record, front to back, that is overflowing with highlights and avoids any filler material.

Like an adrenaline shot to the heart, The OBGMs throw everything they’ve got into an unrelenting 20-minute explosion of a volatile nature with a 10-track record that truly brings a refreshing rush and a raw sense of danger. The energy and vibes throughout The Ends are simply incredible. Without a doubt, this is an album that you must check out, and should be considered among the best releases to emerge this year.

A passion for music has always been a part of Gerrod’s life. As a young boy, he was raised on a steady diet of the music from The Chili Peppers, Aerosmith, The Stones, Prince, and others from his mum. Raised in the GTA, Gerrod continued to foster his love for music by attending a wide range of concerts and learning the drums. His unapologetic passion for music has no bounds and has spread to a wide variety of styles, whether it be the 90’s rock that sound tracked his teenage years, the jazz he studied in university, or his newfound love for hip-hop. He recently received his bachelors in music and education from York University and is passionate about writing and reviewing good (and less than good) music. Gerrod is also the drummer and songwriter for a Toronto based rock & roll band, One In The Chamber.
RELATED ARTICLES
album reviewalbum reviewsblack box music
7.0