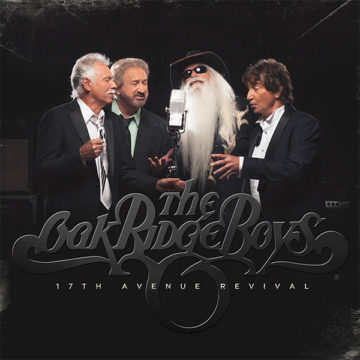 The Oak Ridge Boys have been around for a very long time, this current lineup has been together since the mid 1970s. Interestingly they may not have the commercial success they once had, and at the same time they are producing some of their best ever work. 17th Avenue Revival is one brilliant album full of the famous harmonies fans have grown to love, but there is much more to this album, a lot more.

Working with producer Dave Cobb (Shooter Jennings, Sturgill Simpson) and recording at the famous RCA Studio A in Nashville (on 17th Avenue, South, hence the title), The Oak Ridge Boys have gone back in time while remaining current. Cobb, who now owns the famous studio, has a way of producing The Oak Ridge Boys that brings out the absolute best in them. Cobb has a way of  keeping them contemporary while dipping into the past and their history.

On this album, as with their last couple of releases, the band is focused on Gospel music. But that is simplifying the album. It is rockabilly Gospel music, the type you might have heard back in the 1950s. The Oak Ridge Boys and Cobb have assembled some stellar players for the album and selected nine songs, mainly Cobb (guitar,) Mike Webb (piano) and Chris Powell (drums and percussion). Together they make the perfect backing for The Oak Ridge Boys to do their thing.

Employing some fine writers (Brandy Clark, Vince Gill) but also relying on traditional songs (“Walk In Jerusalem”) and classics (“Where He Leads I Will Follow”). The songs are chosen carefully. Yes there is a religious theme running through, but you also get social commentary (“Pray To Jesus”), loss (“Brand New Star”) and optimism (“There Will be Light”).

This is a brillant and an important album. The Oak Ridge Boys have a lot to say and they use the medium of the album to say it. 17th Avenue Revival is a revival. It is a stunning album that should not be ignored, and much like Cash’s work in his later years, this will be seen as a classic in years to come.

Born and raised in Whitby, Aaron discovered music through his love of The Beatles. This led to a career in radio, writing for various publications, and ultimately a radio show about The Beatles (Beatles Universe), which ran for over four years. When not immersed in music, Aaron enjoys spending time with the loves of his life -- his wife Andrea, and daughters Emily and Linda (all of whom have an intense love of music too).
RELATED ARTICLES
17th avenue revivalalbum reviewsbrand new star