SPILL ALBUM REVIEW: THE MIGHTY MIGHTY BOSSTONES – WHILE WE’RE AT IT 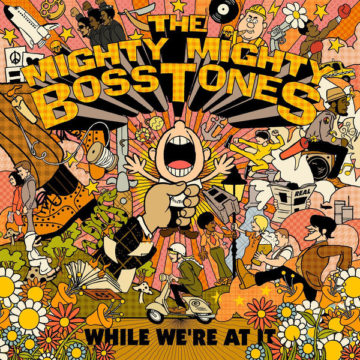 It is interesting for me that this is the second band this month that I have chosen to review that found the largest part of its fame in the 1990s, a decade now famous for being the final heyday of alt-rock (the other review was of Dave Matthews Band and their album Come Tomorrow). “Boston’s best-dressed band”, the Mighty Mighty Bosstones made their mark on the decade in 1997 with Let’s Face It, an album that went platinum in the USA and helped revive the ska genre. Twenty-one years have passed since then, twenty-nine since their 1989 debut, and seven since their most recent release, 2011’s The Magic of Youth. And what impact has that passage of time had on the band? Sonically, at least on first listen, not a lot. The guitars, tonally in particular, sound largely the same as ever, as do Dicky Barrett’s vocals, always delivered with sincerity and awareness of pacing and rhyme. As has always been the case, the horns are bright and active, used to punctuate the main points to the songs, and the rhythm section is out-of-this-world good, especially the bass, which is the most significant part of any ska band, but especially the Bosstones.

If there is a significant consideration to hold in your mind as you listen to this album, it is the passage of time and the impact of the passage on the lyrical focus. When the Bosstones made their debut, it was during George Bush’s time as President of the USA, a time characterized by recession, conservatism, and war. Fast forward almost 30 years and While We’re At It finds itself in similar territory, with Trump’s America doubling down on the conservatism and threats of war. You’d think then that the Bosstones would maybe be worn down by these truths, but despite all the possibility for despair, and all the topical writing on this album, you are left with reason for hope. “Wonderful Day for the Race” is a celebration of just that, with “The Mad Dash” echoing a similar ideology, that there is possibility and there is reason for hope if we can just wade through all the crap in order to see it. Though it is the most cynically positive (is that possible?), the best example of having to make your way uphill through the brambles in order to appreciate the sunset is “Divide”, a two-minute tour through the uncertainty of many American realities in 2018 that actually borders on poetry at times, something unfamiliar to Barrett’s standard lyrics, which tend to be more literal and straightforward.

There is no doubt that While We’re At It is worth a listen, and not just to longtime fans of the band; for its message of hope and resiliency, it is further proof as well that these are fertile times for song-writing.

SPILL ALBUM REVIEW: THE MIGHTY MIGHTY BOSSTONES – WHILE WE’RE AT IT