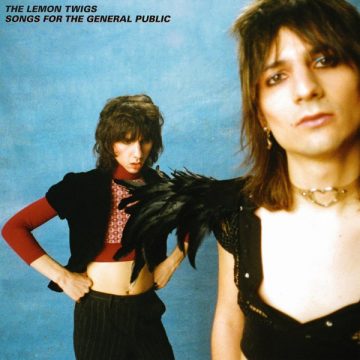 The Lemon Twigs
Songs For The General Public
4AD

Returning after their previous release, ambitious rock opera Go to School, Long Island brothers Michael and Brian D’Addario get back to the basics with more straight-ahead pop songs. Songs for the General Public find the Lemon Twigs in a similar place as their 2016 debut, Do Hollywood, but with generally more well-crafted songs. The D’Addario brothers bring 12 tracks, inspired by their songwriting heroes of the ‘60s and ‘70s.

On “Live In Favor of Tomorrow” and “Only the Fool”, the Lemon Twigs explore elements of ‘60s California pop, while tracks like “Hell on Wheels” and “Fight”, are pure glam rock anthems, with songs that would have fit in perfectly on T. Rex’s Electric Warrior.

“The One”, the first single to be released from the album, clocks in at under three minutes. With its shimmering pop guitar and Motown horn chorus, it is pure genius from the long-gone days of  AM radio. The subject matter of not being able to find a partner and surrendering to loneliness is masked perfectly with upbeat pop hooks and powerful vocals from Brian.

Perhaps the most haunting track out of the dozen is “Somebody Loving You”, which sounds like a deleted track from The Beach Boys’ Pet Sounds. The falsetto vocals throughout the verses and the densely-layered harmonies in the chorus is pure Brian Wilson. The synthesizer chord changes are almost over the top pop, but with the Beach Boys influence it completely works.

Songs for the General Public is certainly the most solid piece of work to date from the D’Addario brothers. Every track works and combines elements of AM bubble gum and trashy glam rock. If it is a sign of things to come, we can continue to expect great things from The Lemon Twigs for a long, long time.

As a child growing up in the suburbs, Ryan found music as a way to soothe his boredom. After first hearing AC/DC at the age of 10, he was hooked on music. Tracing its roots to the ‘50s, he became obsessed with Elvis, Buddy Holly and Chuck Berry. Somehow that led to grunge, then psych-rock, then jazz, etc. The list goes on and on and his collection of vinyl records continues to grow.
RELATED ARTICLES
4adalbum reviewalbum reviews
6.0