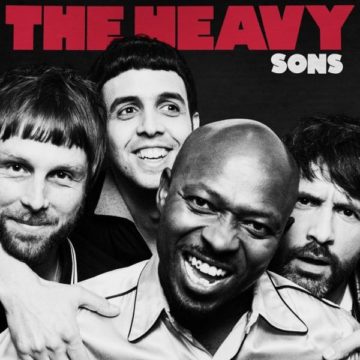 The Heavy exploded onto the music scene like a ticking time bomb, bellowing out incendiary party-rock anthems that have hyped up crowds all over the world. These righteous tunes proved to be mighty successful and have served as the band’s bread and butter for over a decade and counting. And so, the band continues to walk down the same road with the fifth album, Sons—a collection of short, random, straight-to-the-point bangers.

The British four-piece are no strangers to mashing up different genres of rock, jazz, funk, soul, blues and hip hop together into effortlessly cool songs—a tradition that gets carried on into Sons. Sonically, this new album packs the same wallop that the band has maintained since its salad days.

Opening track “Heavy For You” perfectly captures the powerful energy of The Heavy’s live shows, hammering the listener with filthy, wall-of-sound guitar licks. There’s also the tricky “Put The Hurt On Me,” featuring an ingenious, groovy beat played on a wine glass, while “A Whole Lot Of Love” is scuzzy glam-rock at its finest. And “Better As One” serves as a rallying cry for peace and unity written by frontman Kelvin Swaby after the violent events that occurred in Charlottesville in 2017.

On a negative note, the writing doesn’t meet the same meaningful depth of The Heavy’s past triumphs, like 2012’s The Glorious Dead or 2009’s The House That Dirt Built. Perhaps nowhere is this better exemplified than on “Simple Things,” a funk jam where Swaby sings a variation of lyrics that all end with the phrase “simple things” on repeat, followed by “Fire,” which contains a similar formula but with a choir repeatedly exclaiming “fire” throughout the entirety of the song’s latter half.

In the end, Sons is less a purposely-structured album and more a compilation of catchy songs that make for a good—but not glorious—addition to The Heavy’s booming discography.