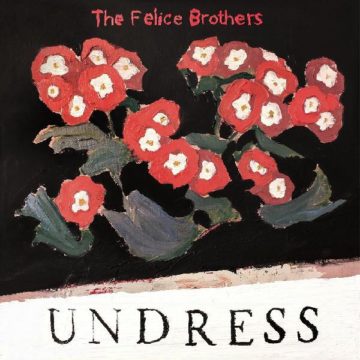 There are many things I love about Undress by The Felice Brothers. It is hard to know where to begin. Undress is the 14th album from The Felice Brothers, and their first album of new material in three years. And once again, they live up to expectations. The second thing I love about this album is that it was recorded live to tape, with minimal overdubs. This is practically a live performance captured on tape. The third thing I love about this album are the songs. Undress is comprised of 12 stunning songs that bring out the emotion in the listener.

The Felice Brothers consist of the core and long-standing members, Ian and James Felice. Joining them on this outing are Will Lawrence (drums) and Jesske Hume (bass). The album is produced by Jeremy Backofen, who mixed their last album. He has a feel for this band and he allows them to tell the stories they want. And this album is chock full of stories. The band uses different arrangements and styles to fit every song.

“Hometown Hero”, for example, is more Americana than the rest of the album, which does not sound like any of the others, and that is the point. This is an album consisting of a variety of styles and yet it holds together as a unit. And Undress should be treated in that manner, as an album. It works much better when you listen to it from beginning to end.

Lyrically, Undress sounds more personal than other Felice Brothers albums, and they do this by telling stories about characters. Although these are stories about people, the songs do reflect political and social issues. Again, listen to “Hometown Hero”, about a person being released from jail:

“Tell the kids I am here to stay/
And tell your new one/
That he is my son.”

Again, a great deal being said about a great many things in a very few words. Other songs touch on the struggles of the people. However it all comes to a head in the last track, “Socrates”, which is pure genius and pure anger. The song starts simply and ends simply, but in between is a slow build up. Any excerpt from the lyrics would do it a great injustice. It must be heard in its entirety to be fully appreciated.

The Felice Brothers have, once again, raised the bar. This album is a work of art lyrically, musically, and in terms of arranging and production. The band is tight, the musicianship brilliant and Undress just may be the album of the year.

Born and raised in Whitby, Aaron discovered music through his love of The Beatles. This led to a career in radio, writing for various publications, and ultimately a radio show about The Beatles (Beatles Universe), which ran for over four years. When not immersed in music, Aaron enjoys spending time with the loves of his life -- his wife Andrea, and daughters Emily and Linda (all of whom have an intense love of music too).
RELATED ARTICLES
album reviewalbum reviewsthe felice brothers
6.0