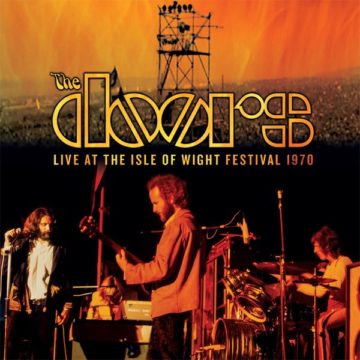 For the first time since 1970, The Doors performance at the legendary Isle of Wight gets officially released; which begs us to ask the question, why now? It seems odd that a recording from such an iconic festival would have deemed a release decades ago.

Released alongside the album is a Blu Ray/DVD version of the performance which has been wonderfully remastered. Before the only footage available from their Isle of Wight performance were pixilated bootlegs on YouTube. This, probably even more so than the CD, is the key reason to buy a copy. The fact that it was their last filmed show also adds to the attraction of this combo release.

The songs are all one’s fans are quite fairly familiar with, nothing too obscure with the exception that it features a live version of “Ship of Fools”, a song that rarely appears on their better known live albums. Aside from that, there really isn’t anything here that you couldn’t get from their 1970 release Absolutely Live or Live in Vancouver. What really makes this recording so special though, especially for aficionados, is not how great the performance is but that it is really the last quality documentation of the band in a live setting. There are several recordings of the “final” Doors concert online, however all are terribly recorded bootlegs.

Despite this not being their best live release, the music on Live at the Isle of Wight is not substandard by any means. In fact, quite the opposite. Morrison’s vocals are solid, especially considering he was quite inebriated at the time (he reportedly shared two bottles of Southern Comfort backstage with Roger Daltrey before performing). When watching the footage, he does seem a tad drowsy when comparing his performance to their renowned 1968 shows Hollywood Bowl or the Roundhouse in London. Those expecting to see the nimble Lizard King clad in leather pants and conch belts will be disappointed. Here we get the bearded poet version of Morrison, a tad over weight and quite subdued. Still, his charmingly hoarse croons and commanding screams are enough to keep you engrossed. Keyboardist Ray Manzerek also lends his virtuosity to the standout solo on “Light My Fire” while guitarist Robby Krieger lays some mean psy-rockin’ flamenco licks in there too.

The Doors’ Live at the Isle of Wight 1970, while not the best live recording their discography, has great merit and is really a temptation for any fanatic of the band.

As a child growing up in the suburbs, Ryan found music as a way to soothe his boredom. After first hearing AC/DC at the age of 10, he was hooked on music. Tracing its roots to the ‘50s, he became obsessed with Elvis, Buddy Holly and Chuck Berry. Somehow that led to grunge, then psych-rock, then jazz, etc. The list goes on and on and his collection of vinyl records continues to grow.
RELATED ARTICLES
album reviewseagle visionthe doors
8.0