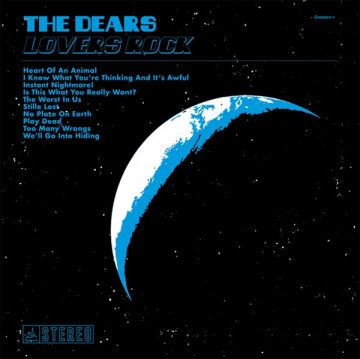 The Dears’ eighth album, Lovers Rock, is an absolutely pleasing collection of sonic delights for fans old and new. Amongst the catchy hooks, vocal falsettos, and melancholic pop-noir exists a deepness which is consistent with each offering from The Dears.

Murray Lightburn and Natalia Yanchak are joined by drummer Jeff Luciani , guitarist Steve Raegele, and bassist Rémi-Jean LeBlanc. Sam Roberts and saxophonists Alex Francoeur and  E Street Band’s Jake Clemons also make appearances. Of note, the use of the saxophone isn’t typical of many songs from The Dears, but when it is, it’s well appointed–case in point, “Find Our Way To Freedom” from The Dears’ 2006 release, Gang Of Losers, which was performed eloquently by Lightburn’s late father, Rev.William J. Lightburn.

The first two singles released from Lovers Rock, “Heart Of An Animal” and “I Know What You’re Thinking And It’s Awful”, kick things off as ridiculously striking tunes, obvious choices for singles.

“Instant Nightmare!” explodes with a thunderous buzzing guitar, suggestive of Link Wray, with additional strings and lasers. Yanchak takes the helms on vocals with a helping hand from guest musician, fellow Montrealer Sam Roberts. The exclamation mark in the song title is well-placed in this powerful ballad.

“Is This What You Really Want” would fit nicely into the catalogue from The Smiths, minus the keyboards and saxophone. This is a mellow entry which could easily be mistaken for a single from Lightburn’s 2019 well-received, bluesy crooning solo album, Hear Me Out. Additionally, on the back end, “Play Dead” and “Too Many Wrongs” are stripped-down tracks which also really highlight Lightburn’s vocals.

“The Worst In Us” starts very satisfyingly as an upbeat rock theme. Near the half-way point it takes a turn, shifting to an ‘80s-inspired echoing drum solo and then keyboard synth, reminiscent of a darker version of “Our House” by Madness, with a touch of “Last Time Forever” by Squeeze. Despite the title of the track, it’s an “us against the world” defiant love song. “And while they’re bringing down the rest of us/They’re never bringing out the worst in us”.

Lovers Rock is described in its link to The Dears’ 2003 release No Cities Left, by Lightburn, “… it’s like they’re interlocked. But it’s a different kind of doom.” Doom, rightfully so, seems to be an underlying theme in The Dears’ musical soundscape. One which is always overcome, and in the end, replaced with a defiant joy. Lovers Rock continues the legacy of The Dears as a persistent gift in the lineage of Canadian modern rock.

John Graham is a Vancouver-area resident who typically spends most days admiring music of all genres. When not listening to music, John is usually at a live show, somewhere in the bowels of Vancouver.
RELATED ARTICLES
album reviewalbum reviewslovers rock
6.0

by Michelle La on May 15, 2020
Bloods Seattle Share It Music Pop punk trio Bloods pens a generous ode to the legendary city of grunge on new EP Seattle. Through six punchy songs, the band, that originally hails from Sydney, [...]
10

by Jake Collier on May 8, 2020
Choir Boy Gathering Swans DAIS Gathering Swans is Choir Boy’s second album following Passive with Desire, where the world got a chance to find out just how talented Adam Klopp and his [...]
8.0