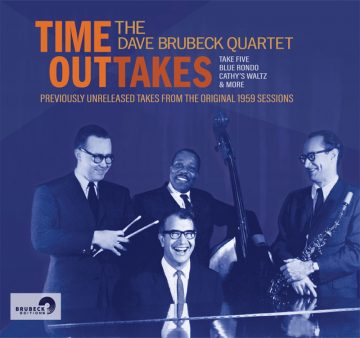 If ever there was a single album that acted as a gateway to the genre for generations of jazz school students while also managing to push the style forward, so much so that it’s lasting impact is still felt today, The Dave Brubeck Quartet’s Take Five is a definite contender. Originally released in 1959, Time Out is a landmark record that continues to captivate the minds of musicians, over six decades later. With that, The Brubeck estate has released Time Outtakes, a collection of seven unreleased outtakes from the sessions that also includes two previously unreleased songs from the era.

Much like the original, Time Outtakes opens with “Blue Rondo À La Turk“. The familiar tune is brought to life with alternative solos, phrasing, and arrangements in a manner that remains nostalgic while floating through the speakers like a breath of fresh air. The simple polyrhythmic shifts are sublime, which is perhaps where its original genius lies. As the classic album continues forward with different takes on “Strange Meadowlark”, “Three To Get Ready”, and “Cathy’s Waltz” (curiously spelt with a C, as opposed to “Kathy” on the original album), “Take Five”, naturally, is the highlight of this collection of music. While not as catchy as the original, this new variation on “Take Five” doubles down on rhythmic sophistication for a sparser soundscape that revels in complexity rather than the seemingly simplistic nature, despite the odd time signature swing of the original, and furthermore features an extensive and building drum solo section.

Of the unreleased songs, Time Outtakes features two tracks, “I’m In A Dancing Mood” and “Watusi Jam”. The former is a stunning track that shifts in tone, meter, and style throughout its run, opening with a classically-inspired head, only to morph into an offbeat swing driven by a melodic sax. “Watusi Jam”, on the other hand, feels far more spontaneous and exciting. Living up to its name, this is certainly a jam that is very much among the most exciting music on Time Outtakes. Propelled by Brubeck’s virtuosic piano playing and bombastic drum solo by Joe Morello, “Watusi Jam” brings the quartet out of cool jazz territory as the ensemble can be felt pushing their musical limits in a manner that feels aggressive and explosive.

By its very nature – both live and in the studio – if you manage to play the same song exactly the same way twice, then you aren’t jazzing correctly. With this comes a level of musical sophistication, unpredictability, excitement, risk, and beauty that has allowed jazz to endure. Time Outtakes is a further testament to this very notion. While not exceeding the timelessness of the original, Time Outtakes is a strong companion to Time Out that further expresses the musicality and songwriting of The Dave Brubeck Quartet at their quintessential peak.