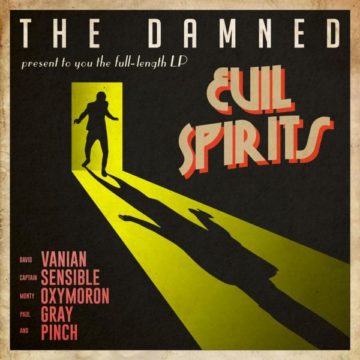 The Damned formed in London in 1976 and many would argue they released the first U.K. ‘punk’ single that year, “New Rose” — a very influential record and band. They went on to issue ten albums with various member changes. Evil Spirits is their 11th album and features mainstay David Vanian on vocals and original guitarist, Captain Sensible. Joining them for this album is Paul Gray (bass), who has worked with the band in the past,  Monty Oxy Moron (keyboards), who joined the band in 1996; Pinch (drums), who has been with the band since 1999.

Evil Spirits is their first studio album since 2008’s So, Who’s Paranoid. A brilliant album and one that might have been hard for them to match. Evil Spirits however was produced by Tony Visconti, a very wise choice. Visconti has tapped into the band’s history and their influences. No longer just a punk band, The Damned sound more like a psychedelic band from 1969, and it works. It is a bit retro, but overall, Visconti has regrouped the band into a tight unit that has their feet firmly planted in psychedelic rock, but they still have the ability to sound current.

Since their last album, this band has grown musically. Perhaps their constant touring over the past ten years has allowed them to develop their playing and it also gave them time to write some fantastic songs. For Evil Spirits, it seems they took their time to put together a strong album. They have come up with very melodic tunes, infused with some great organ playing and some of Sensible’s best guitar playing  ever.

Lyrically, they are not shying away from world issues. “The Enemy In Disguise”, “We’re So Nice”, and the title track, “Evil Spirits” all address world governments and other socio-political issues. Vanian has never sounded angrier and his voice is as strong as ever.

The Damned are not the kids who issued Damned Damned Damned, they are now adults, addressing adult issues. They have grown with their audience and Evil Spirits is perfect for those who have grown up with The Damned. They are not ‘punk’ anymore but they are angry, aware of social issues and they are ready to voice the concerns. In doing so, they may have made their best album yet.

Born and raised in Whitby, Aaron discovered music through his love of The Beatles. This led to a career in radio, writing for various publications, and ultimately a radio show about The Beatles (Beatles Universe), which ran for over four years. When not immersed in music, Aaron enjoys spending time with the loves of his life -- his wife Andrea, and daughters Emily and Linda (all of whom have an intense love of music too).
RELATED ARTICLES
album reviewsevil spiritssearch and destroy
9.0