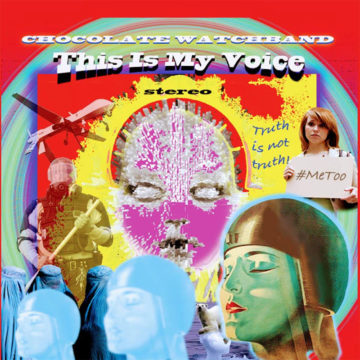 The Chocolate Watchband
This Is My Voice
Dirty Water Records

Revered proto-punk rock outfit, The Chocolate Watchband, have returned with their first album since 2000’s Get Away. This Is My Voice is a track album which takes the listener back to the band’s roots in the mid ‘60s as a psychedelic garage band who laid down much of the roadwork towards what would become punk rock. The band, consisting of founding members vocalist David Aguilar and guitarist Tim Abbott, plus Gary Andrijasevich on drums, along with second generation fans, guitarist Derek See and bassist Alec Palao (Grammy-nominated producer/ historian), has newly signed with the UK’s Dirty Water Records and This Is My Voice reflects the style and sound which both band and label are known for.

Opening with the lead single, “Secret Rendezvous”, The Chocolate Watchband return with a grimy fury of old school punk. This is apparent immediately from the fuzzy guitar riff and gravelly vocals. This is only topped by the slow burning acoustic “Judgement Day” which features an Eastern influence on the sitar emulator which opens the song, along with a bluesy harmonic riffing throughout the length of the track. It is also a stellar vocal performance from Aguilar.

As the album continues, it includes rich elements of the blues (“Take A Ride”, “I Can’t Seem To Make You Mine”), experimental and retro psychedelia (“Bed”, “Bombay Pipeline”), and hard hitting proto-punk rock intone of The Stooges and the MC5 (“Talk Talk”). The Chocolate Watchband does a seamless job of recreating an ascetic which only seemed to thrive for half a decade or so over half a century later in a manner that feels refreshing and exciting.

This Is My Voice is a great vintage punk rock release. Not only is it great to see the return of The Chocolate Watchband – a band who helped shape the course of punk music for the ‘70s – but it’s great to hear them still kicking ass on a punk record that is as creative as it is true to its roots.

A passion for music has always been a part of Gerrod’s life. As a young boy, he was raised on a steady diet of the music from The Chili Peppers, Aerosmith, The Stones, Prince, and others from his mum. Raised in the GTA, Gerrod continued to foster his love for music by attending a wide range of concerts and learning the drums. His unapologetic passion for music has no bounds and has spread to a wide variety of styles, whether it be the 90’s rock that sound tracked his teenage years, the jazz he studied in university, or his newfound love for hip-hop. He recently received his bachelors in music and education from York University and is passionate about writing and reviewing good (and less than good) music. Gerrod is also the drummer and songwriter for a Toronto based rock & roll band, One In The Chamber.
RELATED ARTICLES
album reviewalbum reviewsdirty water records
6.0