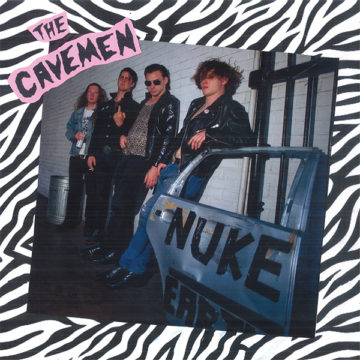 New Zeland punk outfit The Cavemen are back and “ready to drink, fight, fuck and play some goddamn rock and roll”, on their latest full length record, Nuke Earth. Their third album quickly follows the reissue of their 2015 debut record, released this January. Between their work of then and now, Nuke Earth captures the raw fire of a punk band with bridges to burn, while also demonstrating a sense of growth in the band’s songwriting, making for a much more dynamic and ultimately exciting album.

Like a sledgehammer to the side of the head, “Lust For Evil” kicks off the album with a blistering assault of siren like guitars, chugging power chords, and throat wrenching vocals. The drum intro to “Criminal Love” feels frantic, and leaps out of the stereo straight from the closing notes of the opening song. This gives the record a feeling reminiscent of what I imagine a local gig at the Sunset Strip in the 1970s, before it took a turn for the glam rock of the ‘80s, and starring a grimy cast of characters consisting of The Germs, X, and Circle Jerks among others.  This is only further fueled not only by the extremely short amount of time in between songs, but also by the very nature of songs like “Batshit Crazy”, “The Night Jimmy Savile Died”, and “Elvis Is Alive”, a throwback to the era of rock best represented by Elvis and Chuck Berry, that can simply be described as outrageously explosive.

The Cavemen demonstrate a sound that is highly nostalgic of the 1970s, but is equally that of the punk scenes from London, New York, and Los Angeles. There are tinges of The Ramones heard on “Thug” and “Chernobyl Baby”, while songs like “Lust For Evil”, “Concrete Town”, and “Gimme Beer Or Gimme Death” share an unapologetic flair reminiscent of The Sex Pistols and The Germs. The latter is one of the record’s most interesting songs, with its melodic and bluesy guitar solo over top of big band inspired drums. which gives the song an infectious feel that is highly unique to everything else on the album. Such a direct blend of punk influences feels refreshing in an era that is still recovering from the pop punk outburst of the 2000s and makes for a beyond exciting record.

Nuke Earth is a punk record straight from the heart of the ‘70s in every way. In every sense, it rejects – or rather sets ablaze – all that is expected of punk from the last three decades in order to find a sound that would fit in perfectly in the seedy underground of punk’s golden era’ while sounding incredibly unique in today’s modern musical landscape, as there are almost no punk bands like this. The Cavemen have finally found their groove as they pick up a long forgotten torch that seems to have veered far off its path, and by setting it back on course, Nuke Earth will hopefully influence the direction of punk for the next decade, whether you like it or not!

A passion for music has always been a part of Gerrod’s life. As a young boy, he was raised on a steady diet of the music from The Chili Peppers, Aerosmith, The Stones, Prince, and others from his mum. Raised in the GTA, Gerrod continued to foster his love for music by attending a wide range of concerts and learning the drums. His unapologetic passion for music has no bounds and has spread to a wide variety of styles, whether it be the 90’s rock that sound tracked his teenage years, the jazz he studied in university, or his newfound love for hip-hop. He recently received his bachelors in music and education from York University and is passionate about writing and reviewing good (and less than good) music. Gerrod is also the drummer and songwriter for a Toronto based rock & roll band, One In The Chamber.
RELATED ARTICLES
album reviewsthe cavemen
6.0