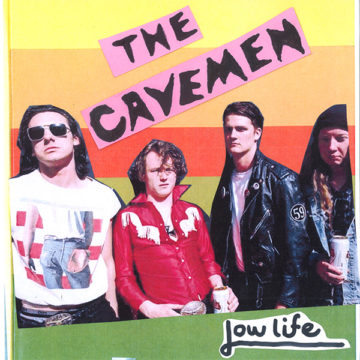 Wasting no time in setting the pace, tone, and expectations for the EP, The Cavemen open with the hart-hitting “Lowlife”, a fuzzy, ultra-distorted, lo-fi punk banger, ripe with throaty vocals and guitar solos which soar above the track. While the songwriting and production are certainly original, it feels like a lost live cut from The Stooges, circa-1973.

“Baby I’d Do It for You” is a sonic assault that feels like it weighs two metric tons, as the lyrics list off a number of things which the singer would do for his baby – including stealing a monkey from the zoo. Despite the blistering pace, the lyrics convey a sense of humor and sheer goofiness that is often lost in modern punk but was common during the genre’s early stages. With a runtime of only one minute and eleven seconds, “Baby I’d Do It for You” is over as quickly as it begins.

Lowlife closes with what is easily the longest song in The Cavemen’s discography, “Drownin’”. Clocking in just shy of five minutes, it is a haunting, dissonant, and fuzz-laden blues track which sounds as if it were unearthed from a time capsule. In addition to its length, this song may be a high-water mark in griminess for The Cavemen, and uses an audio clipping technique that redefines lo-fi.

All in all, Lowlife marks the start of a new chapter for The Cavemen, one which I am genuinely excited for. No one does vintage punk quite like this band and I look forward to seeing what else 2019 has in store for them. With its succinct three songs, Lowlife offers bombastic teaser for fans of punk rock’s top ‘70s revivalists.

A passion for music has always been a part of Gerrod’s life. As a young boy, he was raised on a steady diet of the music from The Chili Peppers, Aerosmith, The Stones, Prince, and others from his mum. Raised in the GTA, Gerrod continued to foster his love for music by attending a wide range of concerts and learning the drums. His unapologetic passion for music has no bounds and has spread to a wide variety of styles, whether it be the 90’s rock that sound tracked his teenage years, the jazz he studied in university, or his newfound love for hip-hop. He recently received his bachelors in music and education from York University and is passionate about writing and reviewing good (and less than good) music. Gerrod is also the drummer and songwriter for a Toronto based rock & roll band, One In The Chamber.
RELATED ARTICLES
album reviewalbum reviewsthe cavemen
9.0