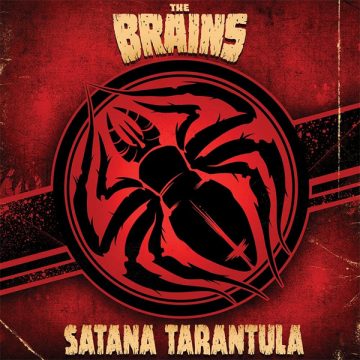 Montreal’s psychobilly trio The Brains have released their blood-pumping, toe-tapping ninth record, Satana Tarantula. Their signature sounds are all here: walking double bass, driving drums, scorching hollow-body guitar, and crooning vocals. Beguiling lyrics abound, and while the subject matter is still tinged by darkness, it’s not as macabre as previous offerings from the band that had a more horrorbilly flavour.

While much of the album is the picture of perfect psychobilly, “C’mon Let’s Do It All Night” showcases the band’s flexibility, swinging between rockabilly and rock’n’roll with ease. The album offers an epic horn section bridge on “El Mariachi de la Muerte”, and a worthy cover of Eddy Grant’s 1983 hit, “Electric Avenue”.

Worth mentioning is “Hell”, with Tim Öhrström of Avatar and an absolutely staggering solo. “Hellhounds” features the Horrorpops’ Patricia Day for a sultry duet. Also making an appearance on “Fire” is Danny B. Harvey of The Head Cat and Swing Cats.

With Satana Tarantula, The Brains have reached a level of punk-infused rockabilly maturity that will give the greats a run for their money. It’ll have fans singing or shouting along… but good luck hitting those impressive notes that Rene D La Muerte does.