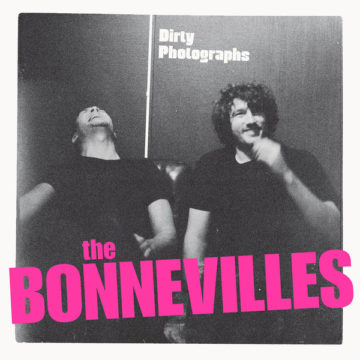 Dirty Photographs is the first album from the Belfast based The Bonnevilles since 2016’s Arrow Pierce My Heart. It is their fifth album overall, and one can see that since their debut in 2010 (with the E.P. Hardtale Lurgan Blues), the band has come a long way in their sound and writing.

The band is really a duo, Andrew McGibbon Jr. (lead guitar and lead vocals) and Chris McMullen (drums), and they make a glorious noise. This album is feel good rock and roll mixed with the blues, rockabilly, and anything else these two want to throw in. Unlike their previous albums, this one is more lyrically upbeat and downright fun with songs about love, sex, and even one about McGibbon’s wife’s backside: the title track, “Dirty Photographs”. “It’s a poem of tribute to my wife’s bum,” he has said, “she’s very pretty and has a lovely one.”. Who can argue or have any issue with those topics.

That is not to say that these two have ventured into middle of the road ballads, quite the opposite actually. This is gritty rock and blues. Not everything is sunshine and happiness either (listen to “The Rebels Shrug”, a clear highlight of the album), but the overall feeling of the album is joy. These guys can make a lot of noise for two people, and they are also able to have many different sounds within that framework. In other words, there is a great deal of variety throughout the album.

Dirty Photographs ends with a fantastic instrumental, “Robo 6000”, that is not only a brilliant way to end the album, but is one of the coolest songs I have heard this year. It just rocks until the stunning ending. Brilliant. McGibbon and McMullen know their stuff and know how to craft interesting, and original songs.

This album is the perfect soundtrack to summer and driving. I listened to it in the car, but I can’t wait to have the windows rolled down and blasting this energetic album in the heat. Fans of the band will love this album, and this will be the breakthrough album for this talented duo.  Dirty Photographs is an excellent album, and fans should note that there is a bonus track on the CD. It’s well worth the price!

Born and raised in Whitby, Aaron discovered music through his love of The Beatles. This led to a career in radio, writing for various publications, and ultimately a radio show about The Beatles (Beatles Universe), which ran for over four years. When not immersed in music, Aaron enjoys spending time with the loves of his life -- his wife Andrea, and daughters Emily and Linda (all of whom have an intense love of music too).
RELATED ARTICLES
album reviewsdirty photographsthe bonnevilles
10