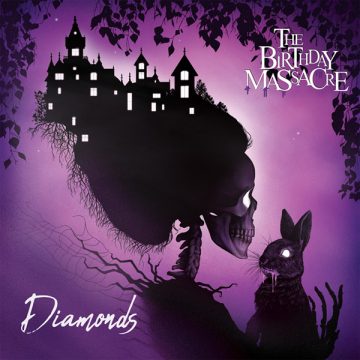 Toronto natives The Birthday Massacre present their signature sound of electronic synth-inspired pop-rock in the form of their eighth studio album Diamonds. This purple gem is full of what long-term Birthday Massacre fans have come to love – fantastical lyrics that play on the light and darkness of life accentuated by lead singer Chibi’s innocent and youthful voice.

Musically, Rainbow and M. Falcore on guitars provide the rock edge that blends seamlessly with Owen’s electronic elements on keyboards creating a sound very reminiscent of ‘80s synth pop. This is music that brings a crowd to a dance floor, something you can lose yourself in.

Diamonds is quite a pretty album with songs that are new but definitely in the same vein of classic Birthday Massacre offerings. The tracks “The Last Goodbye” and “The Sky Will Turn” are songs that sound like they would be right at home on any of their prior albums.

Thematically, it would be great if The Birthday Massacre would step back into the darker side of their repertoire and release more tracks that are darker, grittier. When they released “Blue” in 2005, fans ate up Chibi’s sinister growl that she paired with her classic sweet vocals. It’d be great to hear more from the band coming from that direction. “Superstition” and “Destroyer” from their 2014 album Superstition definitely dove into the more mysterious and eerie side of their music. Similar to that on Diamonds would be “Flashback”, “Crush”, and “Mirrors”.

Overall, Diamonds is a solid Birthday Massacre album to listen and dance to with songs that will surely be ones DJs will want to add to their rotation. It’d be great to hear darker, more sinister, and overall edgier music from them, and it does seem like they are leaning in that direction.

Samantha is both a writer and a fan of the arts and has been able to find numerous ways to pair the two. Eager to dive head first into writing for Spill, Samantha is an avid partaker and reviewer of live art in Toronto serving as an editor at Mooney on Theatre exploring live local theatre, she's a photojournalist for Been Here Done That, a travel, dining and tourism blog that focuses on Toronto and abroad and previously for Lithium Magazine. She's passionate about music, theatre, photography, writing -- not necessarily in that order. She drinks tea more than coffee, prefer ciders over beers, and sings karaoke way too loudly. You can follow her on various social media including Facebook, Twitter, and Instagram.
RELATED ARTICLES
#theroadtosawdustcityalbum reviewalbum reviews