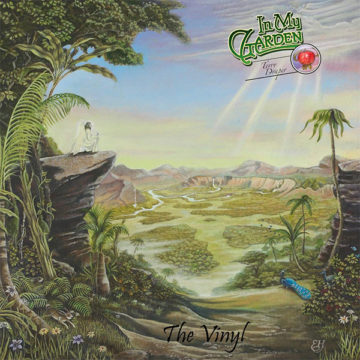 Terry Draper
In My Garden
Terrytunes

Klaatu disbanded in 1982, following the release of their last studio album, Magentalane (1981) and since then writer, drummer and vocalist Terry Draper has released a number of solo albums. In My Garden is a compilation album of tracks from some of those albums, singles and a couple of new songs. And this is the first album Draper has released on vinyl as a solo artist. And a new album on vinyl from Draper is always a welcome addition to any album collections.

The album kicks off with a song originally written in 1983, “I Have A Dream”, which is the perfect way to kick off the album. In many ways this song sums up Draper. Originally released on the album, Window On The World – The Lost 80’s Tapes (2018). Here it introduces Draper’s world of literature, pop music, family bliss, and memories. In the song “Once Upon A Memory” originally from the 2018 release of the same name? h he sings:

What Draper has successfully done is collected older songs and arranged them into an order that not only makes sense but creates a whole new album. Few compilations can make such a claim.

The new songs are quite good and if they are indication of his current work, an album of new material would be more than welcome. “Latitude Adjustment”, issued as a single in 2018 is melodic and a solid pop song with expert playing. “Fish” is a child friendly song that parents will enjoy as well. A great song. And this collection includes the single “Pied Piper” (originally by Crispian St. Peters). Draper confidently and expertly covers the song and not only makes it his own but brings up to date without ruining the beauty of the melody and song.

Terry Draper has released a number of brilliant solo albums and singles. In My Garden serves as an introduction to those albums but also stands alone. He has, quite wisely, arranged the songs into an order that not only makes sense but creates a musical and lyrical theme.

Born and raised in Whitby, Aaron discovered music through his love of The Beatles. This led to a career in radio, writing for various publications, and ultimately a radio show about The Beatles (Beatles Universe), which ran for over four years. When not immersed in music, Aaron enjoys spending time with the loves of his life -- his wife Andrea, and daughters Emily and Linda (all of whom have an intense love of music too).
RELATED ARTICLES
album reviewalbum reviewsfish
9.0