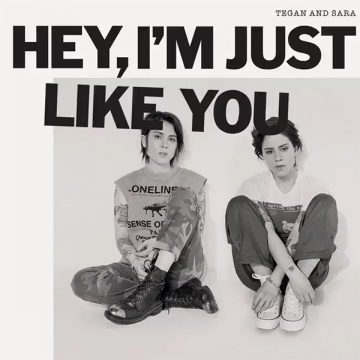 Tegan And Sara
Hey, I’m Just Like You
Sire Records

An album consisting of songs originally written by Tegan and Sara as teenagers had the potential to be too much of a throwback. Fans may have been expecting lo-fi recordings of songs that have been in a time capsule since the late ‘90s. However, the Canadian pop-punk-turned-synthpop duo have created a worthy reimagining of those songs, with no small thanks to their decades of experience as a world-touring powerhouse.

Their early 2000s work was integralto a lot of angsty Canadian teens’ CD collections, and predictably thereis no shortage of angst in the simplistic lyrics. The emotion portrayed here could have seemed a bit of a ruse for the ears of younger fans, as the twins approach 40. But their knowledge of hooks and catchy electronic flourishes proves that while they’ve been around a while, their fanbase has no definable age.

Hey, I’m Just Like You combines the Quin sisters’ ample songwriting experience with lyrics and melodies that hearken back to their punky teen roots. That good old pre-emo howl, set against gently distorted guitars and basic beats, is worthily represented. “I Know I’m Not the Only One” features shouted background vocals that could have easily time travelled from 2001.

The at-times rudimentary instrumentation is certainly a call back to their roots, but there is no denying that the twins’ two decades of music making since have left a considerable mark. Their singular vocal style of layered harmonies has been honed to perfection, illustrated flawlessly on“Please Help Me.”

Where the album finds perfection is on tracks that highlight the sisters’ versatility. “Hello, I’m Right Here,” a piano ballad with strings, has a mature sound that belies the time period in which it was written. “Keep Them Close ‘Cause They Will Fuck You Too” is the triumph of the album, with itsbasic yet heartfelt lyrics, sweeping synth, and muted electronic beats.

Hey, I’m Just Like Youbridges the years between coffee shop open mics and sold-out stadium performances. It’s a skillful amalgamation of past and present, and a downright pleasure.