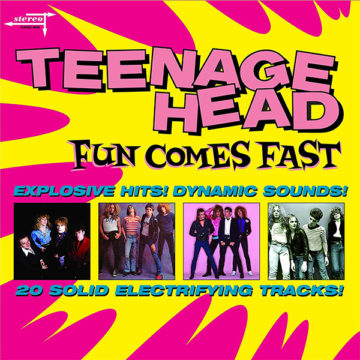 For a punk growing up in Canada in the 1970’s and 80’s, Teenage Head was as essential to the genre as were The Ramones, The Sex Pistols, and The Stooges. The band captured Canadian punk rock and catapulted Toronto’s scene to a level that was similar to that of New York and London. Between 1979 and 1988, the band would release five records before a period of lineup changes and internal strife. Since then, the band has released two more albums; 1996’s Head Disorder being the last collection of new, original material and 2008’s Teenage Head With Marky Ramone which saw the band rerecord a number of their hits with the former Ramones’ drummer and Ramones’ producer Daniel Rey. Since then, Teenage Head have continued as a strong performing force and celebrated their fortieth anniversary in 2015. Now, returning with their first ever greatest hits compilation, Teenage Head have released Fun Comes Fast, a twenty song package chronicling the band’s forty-plus years together that is as nostalgic for lifelong fans as it is exciting for a new generation.

Like a blast from the past, Fun Comes Fast immediately transports the listener back to the east coast punk of the 1970’s where punk was less aggressive and sporting an overt connection to blues rock bands of the 60’s like The Rolling Stones. “Top Down”, the opening track, resembles surf rock with far more distortion and power chords, whereas the lead guitar lines of “Down To The Underground” harkens back to that of Keith Richards and Ronnie Wood. The stylistic resemblance between Teenage Head and The Ramones is uncanny and listening to Fun Comes Fast will leave you wondering how the band is not as well renowned as their New York City counterparts. The tracks that feature Marky Ramone – including “You’re Tearing Me Apart”, “Teenage Beer Drinking Party”, and “Full Time Fool” – especially emphasize this as the band resembles an early 50’s rock band on overdrive, even more so than The Ramones did.

By putting the songs in an order that mixes them up by era, what could have felt in-cohesive made for a very interesting listening experience. By doing so, songs from their 2008 collaboration with Ramone and 1996’s Head Disorder-like “Walkin’ Alone” and “Down To The Underground”- fit in seamlessly with their work throughout the late 70’s and 80’s, including favourites like “Let’s Shake”, “Little Boxes”, “Get Off My Back”, “Disgusteen”, and “Drivin’ Wild (My Invader)”. Despite lineup changes and near decade long breaks between albums, Fun Comes Fast makes a strong case for a sonic identity that, while in the same vein of The Ramones, is entirely unique to Teenage Head.

With such a collection of hits, Fun Comes Fast is the ultimate collection of songs from a group of Canadian icons who should be among the likes of punk rock royalty. For old fans who grew up around following Teenage Head at venues like The Horseshoe Tavern – where on one occasion in 1978 the night ended in a full blown riot – Fun Comes Fast is a welcomed trip down memory lane that will leave you reminiscing and nostalgic. For newer fans, like myself, Teenage Head’s greatest hits collection is beyond exciting and feels like stumbling upon a crate of old records in your parents basement. As a result, Fun Comes Fast is nothing short of spectacular and is bound to turn on punks of all generations to Teenage Head.

A passion for music has always been a part of Gerrod’s life. As a young boy, he was raised on a steady diet of the music from The Chili Peppers, Aerosmith, The Stones, Prince, and others from his mum. Raised in the GTA, Gerrod continued to foster his love for music by attending a wide range of concerts and learning the drums. His unapologetic passion for music has no bounds and has spread to a wide variety of styles, whether it be the 90’s rock that sound tracked his teenage years, the jazz he studied in university, or his newfound love for hip-hop. He recently received his bachelors in music and education from York University and is passionate about writing and reviewing good (and less than good) music. Gerrod is also the drummer and songwriter for a Toronto based rock & roll band, One In The Chamber.
RELATED ARTICLES
album reviewspunkthe horseshoe tavern
7.0