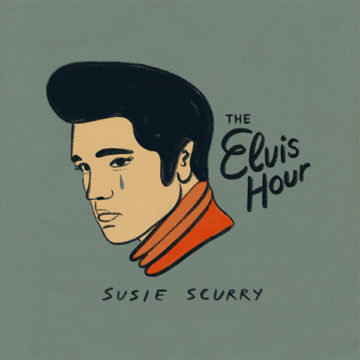 Melbourne, Australia’s artist Susie Scurry released her debut album under the name The Grand Magoozi, and the self-titled album was released in 2016. Here she is, writing and recording under her own name, Susie Scurry and The Elvis Hour is her first release.

Scurry recorded the album in Sheffield, England. It was produced by Colin Elliot, who has produced Jarvis Cocker and Richard Hawley. Actually the songs on this EP sound like Hawley songs. I would not say she is copying him, but the vibe and structure is there. At times I was waiting for Hawley to sing a verse or duet, especially on the opening song, “The Elvis Hour”. This all makes sense when you realize that Hawley’s band backs her up on the EP. This includes Colin Elliot on bass, Shez Sheridan on guitar and Dean Beresford on drums.

Although this is a great six track EP, but it does cross into Hawley’s territory and, at times, it is a bit too close for comfort. Where she shines is when she does songs that are pure Scurry, such as the beautiful “I Don’t Say That Name Anymore”, and the closing song, “Kelham Island”.

Scurry has an a very unique voice and it fits well with the music she is playing. She also has a knack for writing songs that stick in your psyche. After one play, “The Elvis Hour” was firmly and permanently wedged in my head. These are rare talents and she possesses this ability. Her instrumentation is great and she can write, lyrically and musically.

I want to be clear, The Elvis Hour is a great EP. However, it is more of a tribute to Richard Hawley than Elvis. Although Hawley is a brilliant artist, Scurry is as well. She should focus more on her own sound.  Since Scurry is going under her own name, her music should be more a reflection of her. Scurry needs to determine her own voice and sound, once she does this, she will be a force with which to reckon.

Born and raised in Whitby, Aaron discovered music through his love of The Beatles. This led to a career in radio, writing for various publications, and ultimately a radio show about The Beatles (Beatles Universe), which ran for over four years. When not immersed in music, Aaron enjoys spending time with the loves of his life -- his wife Andrea, and daughters Emily and Linda (all of whom have an intense love of music too).
RELATED ARTICLES
album reviewalbum reviewssusie scurry
9.0