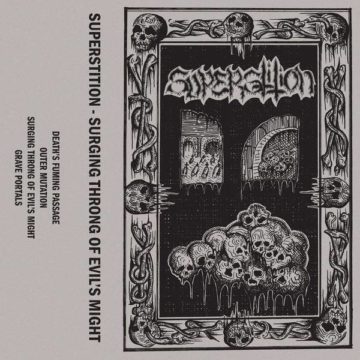 Superstition has released their debut album: Surging Throng of Evil’s Might. The album is respectable, but nothing to really write home about. The music does nothing to truly distinguish itself from the pack. They just sound like a million other heavy metal bands out there.

If heavy metal is your thing, then a new album is available. It will fit the mold perfectly and it is totally acceptable. That’s not what is needed to really make a splash in music in this day and age though. Surging Throng of Evil’s Might does the job of blending into a playlist well without anyone saying anything about how the band is awful or how great they are. There are some very good parts to everything, but nothing that is truly extraordinary. Nothing just stands out. I like the album perfectly fine. There are no true flaws. The only real complaint would be that the first song “Death’s Fuming Passage” kind of downplays the vocals. The rest of the songs play well, but the first is a little weak. The whole album sounds like it is something that would be blared from a high school weight room, but nothing that anyone would listen to otherwise.

Surging Throng of Evil’s Might is one of those albums that is really hard to say is good or bad. It fits perfectly in between. There are no major reasons to dislike it, but there are also no major reasons to praise it. That could mean that the band wanted to use this album to get signed to a label before deciding to really show their skill, so look for them in the future.

The Spill Magazine is a Toronto-based online publication dedicated to covering the independent music scene with a strong focus on our thriving hometown talent. Our writers bring you up-to-date news, in-depth features on musicians and reviews for the latest CD releases. We also travel to the front lines for all local festivals including Canadian Music Week and North by Northeast. Don’t forget to check out our Facebook and Twitter pages for all daily Spill updates.
RELATED ARTICLES
20 buck spinalbum reviewssuperstition
8.0