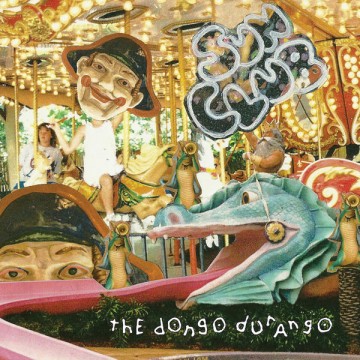 The Sun Club describe themselves as a group of buddies from Baltimore, Maryland playing happy music. On their Facebook page they recently posted that the group was mentioned in Rolling Stone under Missy Elliott and they have now completed their quest in music. What a bunch of fun guys indeed! What else can you expect from band members who call themselves big snack, d-mac, special K, petunia and triscuit?

The Dongo Durango is certainly filled with upbeat, catchy melodies and refrains but there is an intelligence and complexity in their music.  This isn’t an album with just a bunch of happy tunes.

“Summer Feet” and “Beauty Meat” are two stand out pieces with interesting riffs and tempo changes that are well worth listening to over and over again. The fact that The Dongo Durango was recorded live in an old warehouse contributed to the Sun Club’s echoing chants and floating reverberations found throughout the album.

There is no doubt of Sun Club’s energy and enthusiasm and they play like they don’t care whether you like them or not. They are having fun.

An educator who also tries to introduce others to great music. It's a never ending job.
RELATED ARTICLES
album reviewsato records
8.0