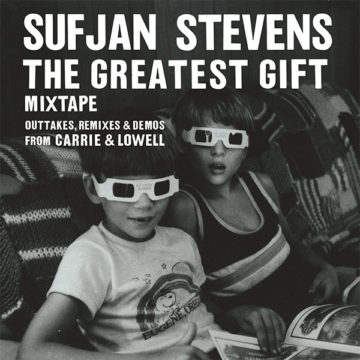 Don’t get it twisted, Sufjan Stevens’ The Greatest Gift: Mixtape is not a Christmas album, nor is it is it something thrown together in time for the Christmas market. This is a well-mixed album of ‘outtakes, remixes and demos from Carrie & Lowell (hence the subtitle of Mixtape) that sounds like a complete and new album rather than a collection.

This past year has been a busy one for Sufjan; a ballet, a live album (Carrie & Lowell Live) and being part of the collaborative album Planetarium. This has kept him busy, but then you add this album to the mix and he has had little time this year to prepare a new release of new music (other than Planetarium, which while released this year, has been years in the making). One gets the sense that this year, Stevens wanted to clean out his musical closet to get ready for some new things. I hope so, but until then, this album will more than do.

The Greatest Gift features songs previously unreleased that leave you questioning why they were never released in the first place ─they all would have been at home on Carrie & Lowell.  He continues with the theme of the loss of his mother and indeed his childhood. Listen to “Wallowa Lake Monster”, where Stevens sings “She left us in Detroit in the rain with a pillowcase” relating to the story of a monster in a lake in Oregon where his mother resides. We hear that while he may be safe in the rain in Detroit, he still desperately wants to be with his mother as she fights her demons (or monster in this case).

With tracks like “The Greatest Gift”, Stevens returns to his Christian writings. The other new songs are just as strong and it is odd that fans have had to wait two years for these treats.

Elsewhere the early demos of songs add a new dimension to the work and they give fans a chance to hear where the songs originate. “Carrie & Lowell (iPhone demo)” has an intimacy that is missing on the finished album and it burrows into the listener and stays there. It is not better than the album version, but it does have one hell of an impact.

Finally, he has other artists from his label, Asthmatic Kitty,remix some of his songs and again these turn out to be very interesting and remarkably good. He co-owns the Asthmatic Kitty label with his stepfather (Lowell Brams) and the label has released some excellent releases this year, one of which being by Helado Negro. For The Greatest Gift, Negro remixes “All of Me Wants All Of You” and “Death With Dignity”, both which sound fresh and do not detract from the original versions. There are times when remixes can be so radically different from the original that songs lose their essence. Not the case here. He maintains the original melody and feel while just adding enough to make both interesting and new. Thomas Bartlett, who co-produced the album Carrie & Lowell, resurrects Doveman who remixes “Exploding Whale”, a song that was only available on a seven-inch single sold at Stevens’ concerts during the Carrie & Lowell tour. Again, an excellent remix. It would have been nice had the original been included on this compilation, but then again, it makes the seven-inch worth seeking out.

Overall, this is an album that Stevens can be proud of. The Greatest Gift is a brilliant collection and a welcome return of some songs that deserve to be heard again and again. Now, what we all need is some new Sufjan Stevens music in the New Year.

Born and raised in Whitby, Aaron discovered music through his love of The Beatles. This led to a career in radio, writing for various publications, and ultimately a radio show about The Beatles (Beatles Universe), which ran for over four years. When not immersed in music, Aaron enjoys spending time with the loves of his life -- his wife Andrea, and daughters Emily and Linda (all of whom have an intense love of music too).
RELATED ARTICLES
album reviewsasthmatic kittysufjan stevens
8.0