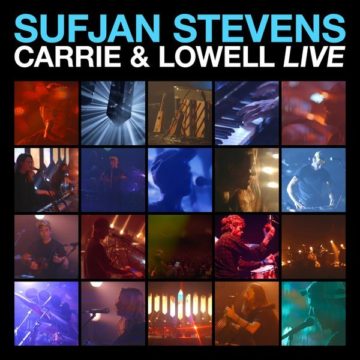 I was very fortunate to have seen two concerts of the Carrie & Lowell Tour by Sufjan Stevens.  I did not go into the concerts as a fan, in fact I knew precious little of his music, but I came out a devotee.  These shows were everything a concert should be, musical, visual, emotional, tight, well performed, moving, and an overall brilliant experience.

Having said that, this album (and accompanying video) is an odd release from Stevens.  He has always shied away from releasing live albums, so this release came as somewhat of a surprise, especially since it has been sometime since the tour has ended.

The album, Carrie & Lowell (2015) is Stevens’ latest studio album (he will be releasing Planetarium in May, an album he has recorded with Nico Muhly, James McAlister and Bryce Dessner) and the album proved to be a landmark album.  It was a highlight of 2015, and it solidified Stevens’ reputation as an artist.  It is a deeply personal record about Stevens’ dealing with the death of his mother, with whom he had a complicated relationship.

So now we have a record of the tour, Carrie & Lowell Live.  I was curious how the shows (which were extremely visual) would translate to being a live album.  I needn’t have worried.  These personal songs, which were difficult to watch during the shows, come alive on this live recording, and for my money, Carrie & Lowell Live stands as one of the finest live albums ever released.  What makes it so great is Sufjan Stevens did not tinker with the recording, it may have been mixed (and mixed brilliantly I might add), but he resisted the urge to remix, or add studio dubs.  The music stands on its own.

The songs here have a boost of energy.  Stevens’ voice is in fine form, and the arrangements flush out the songs and bring the songs to a different level and breathe new life into the music.  The back-up band and singers are tight and provide the perfect backing for Stevens.

on November 9, 2015.  You can almost hear the audience’s gasps as their visual and auditory senses are almost assaulted by Stevens.  “Blue Bucket of Gold”, for example, is extended by twelve minutes that becomes almost unbearable, and then it simply stops.  After each song there is a pause, as the audience grasps and grapples with what they had just experienced. No whoops and shouts at the beginning or during songs, but an attentive audience, and Stevens’ never lets go of his grasp on the audience.

He dips into his catalog a few times (an incredible version of “Vesuvius”  and from the 2010 release The Age of Adz), and “Futile Devices” (also from  The Age of Adz).which benefits from the live treatment.

I am not a fan of live albums, but this one works, perhaps due to the material, but I think it has to do with presentation, the way in which Stevens approaches the music and the songs.  Sufjan Stevens who uses his audio sensibility in his visual arts and his visual sensibility in his music.  A rare talent.

The only criticism is the ‘encore’, a cover of Drake’s “Hotline Bling” with the talented Gallant.  One can’t help but think that the material is very heavy and the inclusion of this song was meant to lighten the mood before Stevens sends his fans on their merry way.

My other criticism is that the video and the album are, thus far, only being issued through streaming and downloads.  It would make an excellent vinyl package and a CD/DVD package, which so many artist opt to do with such a release.  Perhaps he will correct this oversight.

For those who saw the show, this is a welcome reminder of everything that was great about the tour.  For those who did not see the show Carrie & Lowell Live is an excellent opportunity to see what the fuss was about and to appreciate this astounding songs in new arrangements.

Born and raised in Whitby, Aaron discovered music through his love of The Beatles. This led to a career in radio, writing for various publications, and ultimately a radio show about The Beatles (Beatles Universe), which ran for over four years. When not immersed in music, Aaron enjoys spending time with the loves of his life -- his wife Andrea, and daughters Emily and Linda (all of whom have an intense love of music too).
RELATED ARTICLES
album reviewscarrie & lowellsufjan stevens
9.0