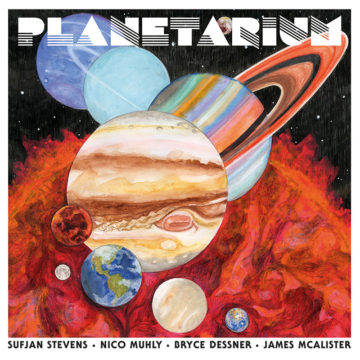 2017 is certainly shaping up to be the year of the album. This album has taken on almost mythical proportions. The group came together in 2012 for a performance at a Dutch concert hall when Nico Muhly was commissioned to do a new piece for their hall. Nico quickly enlisted his friends Sufjan Stevens and Bryce Dessner (The National)  to help, and through Stevens, McAlister was brought into the fold.  Planetarium was created and performed, five years ago. Since then there have been other performances by the four and promises of a studio album. It has taken a number of years, but it is here. The question, does it live up to the hype and was it worth the wait?.  The answer to both questions is yes.

Simply put, this is one amazing album. With Stevens’ incredible lyrics, Muhly’s sense of the epic orchestral sound, Dessner’s distinct style and sense of melody and McAlister’s unique rhythm and percussion. The four parts add to one fantastic whole. Listen to the orchestra arrangements, percussion and vocals/lyrics of “Mars” as just one example.

These four individuals come together to form a group and produce a group effort. One could be tempted to call them a ‘Supergroup”, but this album is more than that. It is a group effort, and it is modern art.

To be honest, I welcome any concept album in 2017, and this album is one hell of a concept album.  Mythology, astrology, science, politics and astronomy are incorporated into the lyrics, forming, dare I say, a concept album.  And it works, from the opening notes, to the conclusion of the album, every second of this record is necessary.

The themes of the album are explored through songs named after the planets, and mythical Gods. But it comes together with the epic “Earth”  At over 15 mins, the song concludes with the mantra ”Run Mission run, Before we arrive”. Chanted over and over with the wall of music, it is nothing short of brilliant.  And going from that heavy song to the musically lighter “Mercury” is almost a relief, yet there remains some foreboding when the song concludes with Sufjan asking “Carrier, my friend; Where do you run?” An excellent and suitable conclusion to an astounding, epic album.

This can only be achieved, with brilliant lyrics and suitable music.  The four bring their best to this project.  Each member creates distinct sounds, and styles, all of which come together to give the world Planetarium.

A great deal of thought was put into this album, especially the sequencing of the songs. I have said it before, but it bears repeating, this album is best listened to in its entirety.  Actually, in its entirety, and with  headphones. The transitions between some of the songs (such as “Halley’s Comet” and “Sun”) add to the flow of the album, and creates a seamless record.  Perfection.

This is an important album, a long time coming, but well worth the wait.  It is a bold statement, both musically and lyrically and is one of the most original albums ever released.  This album is timeless and as such is album you will return to again and again.

Born and raised in Whitby, Aaron discovered music through his love of The Beatles. This led to a career in radio, writing for various publications, and ultimately a radio show about The Beatles (Beatles Universe), which ran for over four years. When not immersed in music, Aaron enjoys spending time with the loves of his life -- his wife Andrea, and daughters Emily and Linda (all of whom have an intense love of music too).
RELATED ARTICLES
4adalbum reviewsearth
10