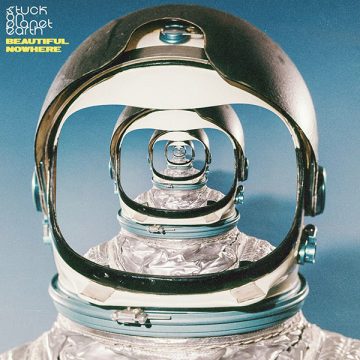 After a number of years as a staple of the Toronto live music community and a handful of singles and EPs, Stuck On Planet Earth have released their long-awaited debut full-length album. Beautiful Nowhere is a fantastic collection of 10 songs that sees the alt-rock/pop trio attempt to steer the genre into uncharted territory for the new decade.

“I Want It Now” opens the record with Latin rhythms, ambient, and occasionally dissonant, acoustic guitar and raspy vocals, before exploding into a groovy chorus inspired by the Josh Klinghoffer era of Red Hot Chili Peppers of the last decade. The contrast between verse and chorus is equally striking as it is oddly cohesive, and sets the tone perfectly for the album with an anthem for the clubs. The singles “Ghosts On The Radio” and “Higher Than Drugs” teeter closer to the alternative pop you’d expect from the radio, however, both tracks bring a sense of excitement and risk that often feels absent from much of the mainstream radio format.

Beyond the singles, Beautiful Nowhere continues to live up to its name and hype. Songs like “Skin Talk”, “Permanent”, and “Serotonin” further twist the alternative pop of today into a style that is simply more interesting and engaging while “Animals” feels like it could have been co-written with Dave Grohl. The album comes to a close with the ambient ballad, “Just To Have You”, which further demonstrates the range of the band’s songwriting and recorded performance.

A passion for music has always been a part of Gerrod’s life. As a young boy, he was raised on a steady diet of the music from The Chili Peppers, Aerosmith, The Stones, Prince, and others from his mum. Raised in the GTA, Gerrod continued to foster his love for music by attending a wide range of concerts and learning the drums. His unapologetic passion for music has no bounds and has spread to a wide variety of styles, whether it be the 90’s rock that sound tracked his teenage years, the jazz he studied in university, or his newfound love for hip-hop. He recently received his bachelors in music and education from York University and is passionate about writing and reviewing good (and less than good) music. Gerrod is also the drummer and songwriter for a Toronto based rock & roll band, One In The Chamber.
RELATED ARTICLES
album reviewalbum reviewsstuck on planet earth
8.0