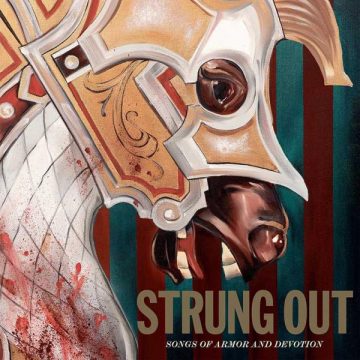 Strung Out
Songs Of Armor And Devotion
Fat Wreck Chords

Strung Out is back with their latest album, Songs of Armor and Devotion. Here, the band returns with intensity and high energy.

The tension is high on this album. The title, Songs of Armor and Devotion is both ironic and deliberate in meaning, delivering themes of vulnerability and dedication.

Bouncing back from some heavy losses, lead singer Jason Cruz lays down lyrics filled with hope and pain. This album is personal, and doesn’t stray far from this, save with a few socio-political moments. “Daggers” is packed with adrenaline and melodic harmonies from the band. Cruz battles with the practically dystopian state of America withhis fast chord progressions.

The best part of this album is how technically sophisticated it is, which can be credited to the likes of new member RJ Shankle on drums, kicking things up a couple notches. The themes of the album are not necessarily cohesive, but the intricacies and intensity of sound, allow for seamless transitions. Cruz’s brazen lyrics are met with off-beat, hellish guitar riffs on “Demons”, creating brash sounds of turmoil.

This album sounds conclusive, cramming 30 years of band history into 13 songs. Songs of Armor and Devotion is a different pace for the band, but it isn’t a solid representation of their best work. Consider this album the closing of an extremely long chapter, in preparation for something new.

Brianna Lawson is a lover of all things music (good music of course). Hailing from Fayetteville, NC byway of Charlotte, NC, she likes to lift heavy things and discuss the essence of hip-hop in her spare time.
RELATED ARTICLES
album reviewalbum reviewsfat wreck chords
10