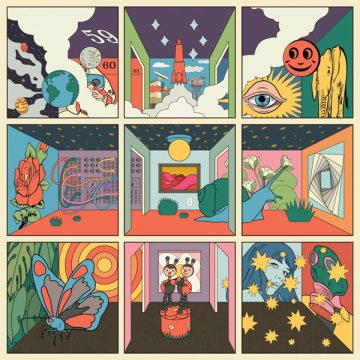 STRFKR has released its unannounced album, Future Past Life. The album was a complete surprise, dropping after only three songs were released randomly. Future Past Life breaks new ground, with each of the songs stripped down to their core and spaced out. They create a dreamlike escape for listeners as they travel through uncharted territory.

“Dear Stranger” begins with a synth-heavy opener which quickly transforms to a groovy ‘70s drum and guitar beat, reminiscent of something out of Studio 54. The chorus quickly transitions to an ‘80s vibe with its synths, bass, airy vocals, and cinematic quality. It’s a track that makes it difficult to resist whipping out your floral flare pants and hitting the disco–do those even exist anymore? As the song progresses, the synths take over to create an atmospheric theatrical dream, where the song ends on a dramatic hallucination.

Future Past Life is a dreamy synth-dominant album with heavy bass guitar and ample psychedelic imagery. Although having unique tracks, the album struggles to present something familiar in a new light. Future Past Life is a mix of traditional chord progressions with ‘80s influences and indie synths, making it easy to connect to. It’s just the right mix of old and new, which may just be able to convince fans of classic rock that indie might be worth checking out.

After borrowing her parents’ 35mm Yashica film camera and never returning it, Kristen discovered her love for photographing artists, particularly live performances. She spends her free time playing with her golden retriever and buying too many plants that she doesn’t have room for.
RELATED ARTICLES
album reviewalbum reviewspolyvinyl
9.0