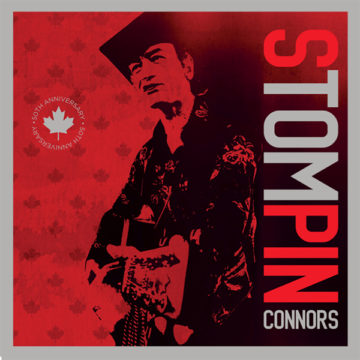 This is basically a ‘best of’ of this great and truly original artist. I grew up with Stompin’ Tom. I saw him more times than I can count and loved every show I saw. I also bought his albums (who can ever forget his famous Boot Records label and all of the artists he signed and some would argue discovered) and saw him through all of his ups and downs. And he was fiercely political, remember when he sent his Juno’s back and boycotted the awards in protest of “turncoat Canadians’ (Canadian artist living in the U.S.) winning the awards when truly Canadian artists could not even get radio play. Controversial, but in his own way, ‘punk’ before ‘punk’ was a genre, and this was a guy wearing a black cowboy hat. Brilliant!

This is the second release since his death in 2013 and, as with the first one (Unreleased Songs From the Vault), Stompin’ Tom Connors 50th Anniversary was put together and overseen by Tom Connors Jr. and The Connors Family. While I applaud the efforts of the family in keeping his music available and alive, I question their decision to combine his classic songs with four cover versions by current country artists. It would have been better to have two separate albums, one a ‘best of’ and one a covers. The last four songs, although quite good (especially Corb Lund’s take on “The Consumer”), they seem distracting and don’t quite fit along Tom’s original versions which are untouchable.

However, this was the decision, perhaps to lure young fans of George Canyon and Whiskey Jack into buying and listening to the original master. For my money I would rather listen to Tom. The songs they picked for the compilation are predictable (but where is “The Martin Hartwell Story”?) but still fun to listen to.  The live version of “Sudbury Saturday Night” (from the classic album Live At The Horseshoe, 1971) is fantastic and a brilliant way to begin the album.

Connors told stories and the songs chosen for this album demonstrate his storytelling ability.  Some are funny (“Margo’s Cargo”) and some near break your heart (“Don Valley Jail”, handled here by The Cuddy/Polley Family Band) but they are stories that resonate and continue to resonate with listeners. Connors sang to and for the working class, and this is evident throughout his career and demonstrated on this small sampler.  And to me, Connors was more than just a “a great Canadian”. He was a man who with principals and a love of the people. I mentioned I saw him in concert. It did not matter the size of the audience, Connors would connect with each and everyone.  He did this with his songs and his stories.

This album reminds us all of what a great man and artist Stompin’ Tom was, and someone who continues to inspire us to this day.  My wish is that the Connors family embarks on a reissue campaign of all of his albums, as many have been out of print for years.  And I could use a new copy of Live At The Horseshoe.

Born and raised in Whitby, Aaron discovered music through his love of The Beatles. This led to a career in radio, writing for various publications, and ultimately a radio show about The Beatles (Beatles Universe), which ran for over four years. When not immersed in music, Aaron enjoys spending time with the loves of his life -- his wife Andrea, and daughters Emily and Linda (all of whom have an intense love of music too).
RELATED ARTICLES
album reviewsanthem legacystompin' tom connors
9.0