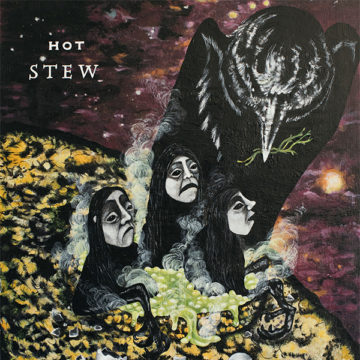 Hailing from Sweden, Stew very well may be among some of the most interesting rock revivalists around as they take classic rock from the late 1960s to mid ‘70s and blend it with a rich sense of the blues and early soul. The power trio — consisting of bassist and vocalist Markus Åsland, guitarist Nicklas Jansso, and drummer Nicklas Dahlgren – have clearly got a great thing going on with their debut four track EP, Hot.

Opening with the Hendrix-inspired riffs and soloing of “Might Be Keeping You”, I find myself immediately hooked. As Åsland’s vocals come in, he can shift from a warm tone reminiscent of Cream’s Jack Bruce to a tone bursting with energy and fire. “Might Be Keeping You” perfectly sets the tone as an explosive bluesy, funky rocker. In contrast, Stew embraces a groovier and more traditional blues approach on “If This Will Be The End”. As a dynamic ballad that grows from soft lows into a high intensity chorus, the song is further accented by Jansso’s lead lines he rips in between Åsland’s vocal melodies.

“Tongue Tied” opens with yet another Hendrix-inspired solo, so clean and dirty all at the same time, as the band dives head first into a sludgy halftime groove. With an extended guitar solo, this very well may be my favourite track on the album; that is, however, until the closing song, “Dig For Gold” a heavy track in tone with early Black Sabbath comes on. While most will miss the connection between Sabbath and the blues, Stew make it more than apparent with the latter half of their EP – an end that is even stronger than the great introduction.

While only four songs in length, Hot is an incredible debut putting Stew near the top of my list for bands to keep an eye on. While I was first intrigued by the guitars, the band’s songwriting and manner of channelling the ‘60s and ‘70s for a modern audience kept me thoroughly entertained throughout the course of the record with flavours reminiscent of Hendrix, Cream, Black Sabbath, and Stevie Ray Vaughan. Where my only complaint is that four songs simply is not enough, Stew prove to be a highlight among the countless rock revivalists that are currently sweeping across North America.