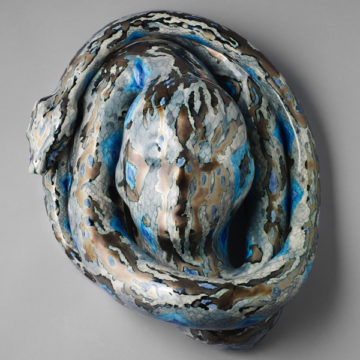 Dark Blue is Steven Lambke’s second solo album, and his first since 2015’s Days Of Heaven. He has recorded with numerous bands, including The Constantines, and most recently with Construction and Destruction (2018’s Revolution C).  He has also released solo albums under the name Baby Eagle.

Although it is a solo album, he does have some help, most notably from one of the other founders/owners of You’ve Changed Records Daniel Romano (drums, percussion, guitars, vocals, organ) but also Dave Nardi (bass, organ, guitars), Ian Romano (drums) and Mark Lalama (piano and accordion).  Romano recorded the album, as well with help from Lambke.

There are so many things to love about Dark Blue. Lambke’s voice is one standout aspect, but it would mean very little without the expert playing and production. He has a truly unique voice and it fits his songs perfectly. The playing is tight and full of energy. He delivers the songs with a sense of urgency and drive.

There is a great deal of heavy percussion on this album. The drums are very much in the foreground and this completely works for Lambke. The drumming becomes the driving force of the song. It makes for interesting and captivating listening. Once he has your attention, he hits you with strong melodies and some of the finest lyrics available today. The lyrics are closer to poetry than song lyrics. A book of the lyrics is available as well, which is highly recommended. Look at the last song, “All My Days Are Light And Gold”, which features the closing verse:

Yeats would be proud.

He revisits an older song on Dark Blue, “At The Start Of A Song”, which he had recorded with Construction and Destruction on the album, Revolution C. Here the song is more angry than questioning as if the desire to write a song is replaced with the need. It is just one of the many highlights on Dark Blue.

This is a brilliant album. Musically, it is hard to categorize, which is also a strength. It runs the gamut of rock, folk, and alternative, but it is all great. Lambke’s writing has never been stronger. One spin of this album and you will realize that he is one of Canada’s finest writers and performers. He should and needs to be heard.

Born and raised in Whitby, Aaron discovered music through his love of The Beatles. This led to a career in radio, writing for various publications, and ultimately a radio show about The Beatles (Beatles Universe), which ran for over four years. When not immersed in music, Aaron enjoys spending time with the loves of his life -- his wife Andrea, and daughters Emily and Linda (all of whom have an intense love of music too).
RELATED ARTICLES
album reviewalbum reviewsdark blue
8.0