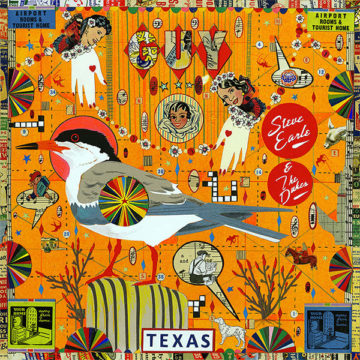 Most cover albums are pretty low-stakes affairs, especially when the creator is an aging legend whose legacy is secure. Not so for Steve Earle.

“No way I could get out of doing this record”, said Earle in the press release for Guy, an album covering the songs of Earle’s close friend and mentor, the late Guy Clark.

At Guy’s best moments, Earle brings a new dimension to Clark’s words; “Rita Ballow” and “Anyhow I Love You”, for example, are more lonesome and sad than their original counterparts. “Out in the Parking Lot” is reimagined as a fast-paced rocker, an approach taken rarely by Clark but frequently by Earle since the beginning of his career.

As both a songwriter and musician, Clark was a master of minimalism. Although Earle has done plenty of that too (see Earle’s 1995 acoustic masterpiece Train a Comin’), it is not the approach he generally takes on Guy. While the full-band barrage adds to “Out in the Parking Lot”, other tracks don’t fare as well. “L.A. Freeway” and “Desperados Waiting for a Train” both feature busier arrangements than the originals without any new ideas. The extra instruments detract from the lyrics, which are always the main focus of a Guy Clark song.

Clearly a labor of love, Guy commemorates a friendship that spanned decades and was ended only by death. However, it still faces the classic problem of a cover album: Why not just listen to the original?

Spill Magazine strives to keep our readers up to date with news and events in the music industry. We keep you informed of the most recent information regarding new releases, tour dates, and information items about your favourite artists.
RELATED ARTICLES
album reviewalbum reviewsdublin blues
10