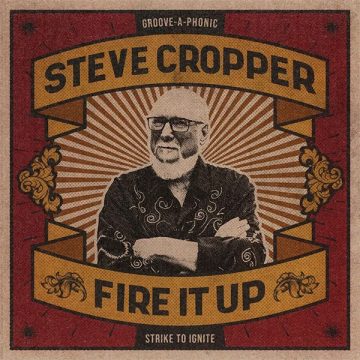 Stax Records was one of the most revered labels of the 60s and 70s – at least where gritty, funky soul music is concerned. Steve Cropper was one of its leading architects; originally guitarist with the groovy Booker T & The MGs, where he refined his classy, concise, tightly-controlled guitar playing, he became a session guitarist par excellence, a producer and a songwriter, not just for Otis Redding but also for many others on the label. His talents were later utilized by a couple of ex-Beatles, and The Blues Brothers, among others. He did record sporadically, but he regards Fire It Up as his first solo album since 1969.

I’m not suggesting that this is worth a wait of more than five decades, but there’s plenty of fine R’n’B and soul music to enjoy. Don’t expect innovation – come on! – but do look for new recordings with a time-honored approach. Roger C. Reale wrote many of the lyrics and handles the vocals, Cropper adds his unique, groove-based sound, and producer Jon Tiven fleshes things out on a variety of instruments. They work well together, as do guest musicians like Felix Cavaliere and drummer Simon Kirke of early 70s UK blues-rockers Free. Even the title of the album’s sole instrumental, the down-home styled R’n’B of “Bush Hog”, recalls those classic sixties 45s.

Yep, Steve Cropper’s still got it, he’s still doing it. Just dig it!

The Spill Magazine is a Toronto-based online publication dedicated to covering the independent music scene with a strong focus on our thriving hometown talent. Our writers bring you up-to-date news, in-depth features on musicians and reviews for the latest CD releases. We also travel to the front lines for all local festivals including Canadian Music Week and North by Northeast. Don’t forget to check out our Facebook and Twitter pages for all daily Spill updates.
RELATED ARTICLES
album reviewalbum reviewsmascot label group
7.0